With Europe still wallowing in recession and the U.S. economy only now showing signs of having turned, hoteliers continue to target Asia for new projects.

China, India and Indonesia are driving record growth, with more than half a million new rooms in development in Asia, according to a new report.

China boasts the largest pipeline in the world, with 407,721 rooms under construction, just under three-quarters of the 557,505 hotel rooms in the works in the region, research group Lodging Econometrics reports. China is home to 21 of the world's top 25 cities for hotel-room growth.

The latest report also matches data from STR Global, which also detailed the volume of hotels in development in China.

Separate research from Cushman & Wakefield showed that Asian hotel investment in 2012 hit $8 billion for the first three quarters in 2012 and was on track to surpass 2011's total - although still some way off the record $12.3 billion investment seen in 2007, before the global financial crisis. 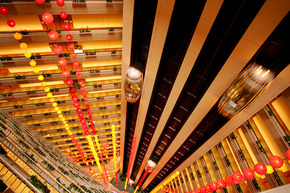 There are signs, though, that China's rampant growth is beginning to lag. Shanghai, with the largest number of hotel rooms in the world, according to the Lodging Econometrics report, has seen two decades of frantic activity - but its growth as of the end of 2012 showed no improvement over the end of the previous year, in terms of projects. The amount of hotel rooms under construction fell 14 percent.

It is Indonesia that is seeing the biggest leap in both projects and room construction, both of which more than doubled last year, albeit off a small base. That fits with a shift by private equity and property developers, who have been reallocating some of the emerging-market risk they had devoted to China to the Southeast Asian nation.

Starwood Hotels & Resorts is the biggest mover in China, with 89 projects under way, providing an added 28,981 rooms. The company, the world's largest hotel chain, focuses on upscale brands such as Sheraton, Westin and the W Hotels.

Hilton Worldwide is not far behind, building 85 projects - and its average size is larger, since they're providing 29,220 rooms, the bulk of them under the Hilton and Doubletree brands.

French chain Accor is also very active in China, with 85 projects under construction, contributing 21,553 rooms for the upscale Pullman Hotels and the economy Ibis brand.

The number of projects is rising faster in China than the number of rooms, the study shows, demonstrating that smaller, midscale hotel brands are growing the fastest, as chains look to appeal to the country's growing middle class.

Although China's economic growth slowed last year and has continued to fall in 2013, the government's response to any economic softening has been to free up bank lending and boost infrastructure development, policies that have contributed to nonstop growth for virtually three decades.

China continues to boast the fastest growth among the world's major economies. But after disappointing first-quarter gross domestic product numbers, economists have been lowering forecasts for 2013. Nomura, for example, now anticipates a growth rate of 7.5 percent this year and next, down from 7.8 percent in 2012.

The Philippines, at 6.4 percent for 2013, and Indonesia, at 6.1 percent, have the next-fastest growth in the region. Nomura predicts Indonesia will sustain that pace into 2014, hitting 6.2 percent economic growth next year, rivaled by India's 6.6 percent pace, while the Philippines is expected to lag to 5.8 percent growth.

The Cushman report indicates those numbers make Southeast Asia the fastest growing part of Asia in terms of international arrivals, with 2012 showing a 15 percent increase over the previous year. South Asia generally also saw decent gains in arrivals, with smaller markets such as Dhaka, the capital of Bangladesh, and Yangong, the biggest city in Myanmar, also attracting recent attention from hotel chains.