The 1920s home has a star-studded list of previous owners. Rock star couple Gwen Stefani and Gavin Rossdale purchased the house in 1998 for $1.375 million, according to the Real Estalker. The couple sold the property in April 2007 for $4.795 million to two-time Emmy nominated television writer/producer Mark Brazill -- known for "3rd Rock From the Sun" and "That 70s Show." 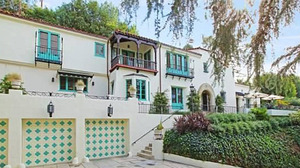 Mr. Brazill sold the home in 2009 to the current owners, who put the home on the market last April.

"The property has been renovated with the utmost historical and architectural sensitivity by the current owners, while original vintage details remain intact," according to Zillow.

The "Modern Family" actor also owns a home in L.A.'s Silver Lake area, according to Zillow.