Basketball legend Michael Jordan is looking for the highest bidder for his 56,000-square-foot compound in Chicago.

Mr. Jordan first put his grand estate on the market for $29 million, then lowered the price to $21 million earlier this year. The home, which features his famous number 23 on the entrance gate, will be available for auction next month. 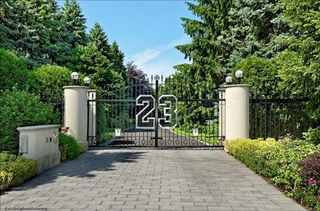 After living in the Chicago suburb home for almost 20 years, the basketball star is ready to move on.

"My kids are grown now and I don't need a large house in Chicago," Mr. Jordan told The Wall Street Journal.

The owner of the NBA team the Charlotte Bobcats, Mr. Jordan splits his time between North Carolina and a newly-built home in Jupiter, Fla., a popular place for celebrities.

The property also features three climate-controlled multi-car garages, as well as locker rooms, showers and a lounge with a glass observation overlook next to the basketball court, WSJ reports.

Mr. Jordan purchased the land for the property in 1991 and moved into the home in 1994, after its completion.

So why is Mr. Jordan heading to auction instead of continuing to search for a buyer?

"Some of the best things in the world are sold at auction, and I've seen that this is the beginning of a trend for selling unique, one-of-a-kind homes," he told the WSJ.

The live auction for the basketball legend's home is scheduled for Nov. 22 and will be staged by New York-based Concierge Auctions. There is no minimum reserve but a $250,000 deposit is required to bid, the paper reports. Bidders will also have the chance to submit opening bids prior to the auction.