Colombian singer-dancer Shakira has listed her Miami Beach mansion for $14.95 million, more than four times what she paid for the waterfront property in 2001.

Shakira--real name: Shakira Isabel Mebarak Ripoll -- purchased the Bayshore area home for $3.38 million. Since then, "The Voice" judge has remodeled the mansion, adding three bedrooms, 3.5 baths and almost 2,000 square feet, according to Redfin. 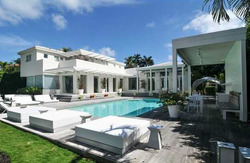 Built in 1951, the waterfront "Zen sanctuary" on high-priced North Bay Road now has a total of six bedrooms, 8.5 baths, and 8,355 square feet of living area, according to the listing. The exterior is all-white, with plenty of "walls of glass."

Amenities include a state-of-the-art kitchen, a master bedroom with nursery and guest quarters. Outside, the home has a hardwood pool deck and direct access to the bay and a dock. 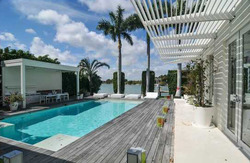