It's that time of year again folks!

With the holiday season winding down, the skies are blue, the air is clear, and mountain slopes all over America are covered in glistening white snow...inviting people all over the country to pack up the car, strap on the skis, and take off!

#10: PARK CITY, UTAH - Only 35 minutes from Salt Lake International Airport, Park City's one of the most accessible mountain destinations in North America. And it's accessible once you're there, too; its complimentary shuttle system is fueled by biodiesel. The town's legacy of silver-mining, and its historic Main Street, provide a quaint feel to the shops, restaurants, and galleries. And Park City's also home to three of North America's top ski resorts. Utah Olympic Park (UOP) was the site of much of the 2002 Winter Olympics competition, and it still offers year-round, state-of-the-art training, competition, and recreation. And the opportunity to perhaps feel a bit like an Olympic athlete while you're doing it!

#9: LAKE PLACID, NEW YORK - Lake Placid is ordinarily a sleepy village in upstate New York. But it has an Olympic history, too. Twice - in 1932 and again in 1980 - this tiny village hosted the whole world for the Winter Olympics. (This was the site of the famous 1980 "Miracle On Ice" hockey game). Being a quiet little village is actually part of Lake Placid's charm...along with skiing and all manner of other winter sports, both on land and on the lake. Overlooking Lake Placid, Whiteface Lodge has 94 comfortable suites and a 54-seat theater. And the Olympic Training Center, bobsledding, skiing, ice-skating, snowshoeing, and a host of other winter sports opportunities are just minutes away. 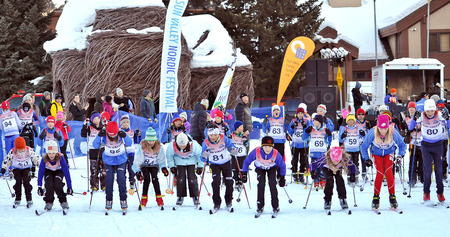 In Sun Valley, you're never too young to do some Nordic skiing.
(Courtesy Sun Valley)

#8: SUN VALLEY, IDAHO - In the early-1930's, W. Averill Harriman, Chairman of the Union Pacific Railroad, wanted to open new markets in the West - especially with new ski areas. So in 1935, he commissioned an Austrian banker named Count Felix Schaffgotsch to begin a search for the perfect North American ski destination. The Count roamed around the West for months. When he came upon the Ketchum Valley in Idaho...he knew he had found the place. After just seven months of construction, Sun Valley opened for the winter of 1936. It's not only got great downhill runs, but also excellent Nordic Skiing, as well. Sun Valley Resort is a unique combination of Old-World European architecture and Wild-West heritage. And the village has wonderful shops, and accommodations ranging from world-class resorts to cozy B&B's.

#7: GIRDWOOD, ALASKA - Girdwood's a former gold-mining town sitting at the foot of the Chugach Mountains, and backed by dramatic peaks and deep forest. It first gained fame as a hippie hang-out in the 60's, and it retains the laid-back, live-and-let-live vibe of those days. Now, though, it's also the biggest ski town in Alaska. Situated about a half-hour south of Anchorage (and its international airport), the Alyeska Resort combines luxury with a frontier, stone-and-wood ambience. 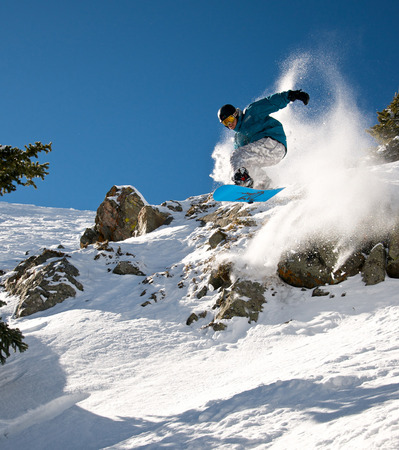 Nestled in a valley just below Mount Alyeska, a 4,000-foot peak with stunning views of the Turnagain Arm bay, it's the largest ski area in Alaska. And Girdwood has what's often called the best bakery in Alaska.

#6: TAOS SKI VALLEY, TAOS, NEW MEXICO - Taos Ski Valley is almost a different world from the town after which it's named. As you drive up to the ski area, high-desert turns into sky-piercing peaks and thick forest. The valley is centered by an Old-Europe-style village with interesting shops and restaurants. From Kachina Peak, high above the Sangre de Cristo Mountains at 12,450 feet, skiers survey rugged runs for the wild-and-crazy types, and manicured runs for the rest of us! This year, visitors will be able to experience Kachina Peak via chairlift for the first time. The Kachina Peak Lift will be one of the highest chairlifts in North America. Then there's that town of Taos down below, the ancestral home of Southwestern art; be sure to visit the two galleries owned by noted local artist Ouray Meyers. 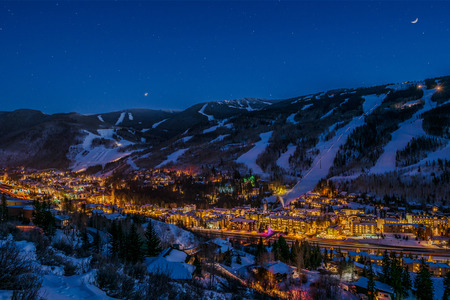 #5: VAIL, COLORADO - Vail is a truly-magical mountain village. It's also one of the most beautiful towns in America, centered by an old European clock tower surrounded by streets filled with a diverse collection of shops, galleries, restaurants, and outdoor outfitters. The resort was actually developed by a former member of the U.S. Army's famed Tenth Mountain Division, which trained here during World War II. Today, Vail Resort is comprised of three lively village areas on Vail Mountain (11,570'), where there's plenty to buy and plenty to eat and drink. The streets are heated in winter, and connected by America's largest free-transportation system. Because this is also one of America's wealthiest towns, there's a lively cultural scene year 'round. And Vail also boasts two of my favorite restaurants in the West, Atwater On Gore Creek and Manor Vail. Each boasts an ambience of romantic luxury. And each boasts world-class - and very creative - cuisine 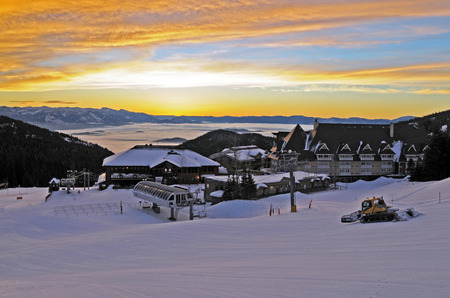 #4: SCHWEITZER MOUNTAIN RESORT, SANDPOINT, IDAHO - You won't see the rich-and-famous set here. They've yet to find this special ski village tucked into the Idaho Panhandle, only forty miles from the Canadian border. Schweitzer Mountain Resort sits at an altitude of 7,000 feet, overlooking the charming town of Sandpoint, as well as the 43-mile-long Lake Pend Orielle (pond-awray), named by French trappers for the ear ornaments worn by local Indians. You'll access the resort via a 25-minute ride up the mountain, navigating sharp switchbacks, deer, and moose. When you take the tram to the top of Schweitzer Mountain, you'll be able to see into three states (Idaho, Washington, and Montana) and two countries (the U.S. and Canada).  You'll be able to ski down uncrowded Western slopes without the long lines characteristic of most world-class ski resorts. (And, just outside Sandpoint, you'll be able to go for a horse-and-buggy ride through a winter wonderland at the noted Western Pleasure Guest Ranch!) 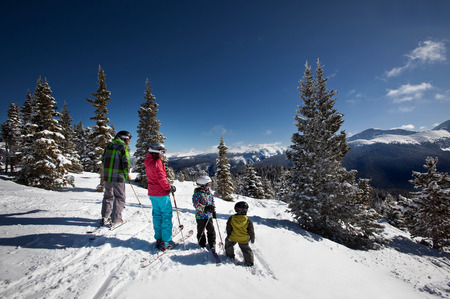 #3: WINTER PARK RESORT, COLORADO - I think Winter Park Resort is one of the coolest ski villages in America. Its lodges are filled with woodsy-but-modern condos with fireplaces and balconies, overlooking dramatic natural backdrops. There are plenty of cafes and boutiques, along with ski shops at which you can replace that item you accidentally left at home. There are playful little touches all around the resort, such as colorful outdoor chairs made of old skis, and xylophones (with loudspeakers) along the paths, on which you can hear your musical creations reverberate around the village. The ski-mountain boasts seven different "territories," ranging from "Chill" to "Challenge." And there's always a lot of apres-ski activity going on, both at the resort and in the colorful mountain town of Winter Park, only a few minutes away. 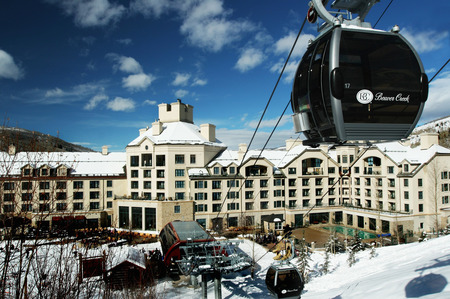 #2: BEAVER CREEK, COLORADO - Skiers come from all over the world for the world-class skiing and the quaint village. Indeed, Beaver Creek resembles a compact old European town, with a main plaza anchored by an ice-skating rink, and surrounded by an eclectic - and luxurious - collection of bistros and shops and galleries. In winter, it often seems as if skis become an extension of the human body, as the entire populace seems to be carrying them. Beaver Creek (and neighboring Vail) will become the center of the skiing world in February, when they host the 2015 FIS Alpine World Ski Championships. Also on the main plaza is the Park Hyatt Beaver Creek Resort and Spa, a striking chateau with a highly-regarded spa, a fitness center, slope-side pool and hot tubs, and three fine restaurants. And everything you need is just outside the door, including the Vilar Performing Arts Center - located underground!

Now, here's my choice for the best skiing spot in America... 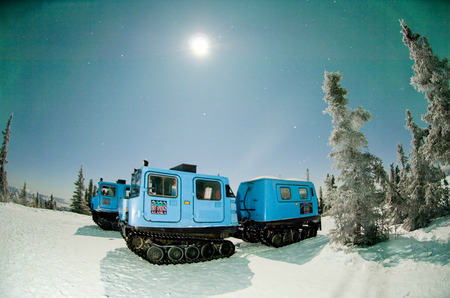 #1: CHENA HOT SPRINGS RESORT, FAIRBANKS, ALASKA - Yup, it's a bit hard to get to. But that's not my only surprise. I've actually saved the biggest one for last! I never said, in this article, that we're only talking about downhill skiing! Although there are mountains all over the place at Chena, there isn't any downhill here! But this rustic/elegant lodge has some of the best cross-country trails in the U.S. - surrounded by some of the best (and most unusual) scenery in the U.S. It is, in fact, one of the northern-most resorts on Earth, only about 80 miles from the Arctic Circle. And it's filled with bucket-list experiences. Where else can you soak in hot springs with ice surrounding them, when the air temperature is below zero? Where else can you find the world's largest museum made completely of ice (which stays open all year long)? Where else can you take a bush plane over the Arctic? Travel by dog-sled? (And meet the huskies who'll be pulling you?) Race through the northern latitudes in a snowmobile? Or cruise through them in a snow-coach? And, if you're lucky enough to go at the right time, to see the magnificent Northern Lights sprawled across a night-sky you'll never forget?

These are my Top 10 Skiing Spots in America. But this column belongs to all of you, as well. What are your choices? Let's hear them!

KILLINGTON, VERMONT - Killington has the largest mountain-trail acreage in the east (more than 1,200 acres), and the largest vertical drop in New England. And those last two words - New England - are very important. This area has an ambience unlike any other. It's bathed in real-life Currier & Ives scenes of families bundled up in horse-drawn sleds, farmers tapping their maple trees, and picturesque villages that haven't changed much in the past few centuries. Killington has more than 200 trails, 32 ski lifts, and two gondolas. And it's filled with those classic New England B&B's and inns that conjure up modern-day images of glowing hearths and hot maple syrup (and maple sugar candy!).