Top 10 Road Trips Around the World


It's summertime (at least in the Northern Hemisphere). And summertime is road-trip time! Where the weather's warm, the windows are open, and the open road calls...and you never know what you'll find on it!

Here are my Top 10 road trips around the world...

No. 10) LEH-MANALI ROUTE, INDIA - The Himalayas! Bracing cold air. Brilliant blue skies (when it's not foggy!). And sky-piercing peaks where the sun bounces off the iridescent snow sparkling on top. The route between Leh and Manali is one of the most scenic in the world. The route parallels the River Chandra much of the way, where the views of mountains and glaciers are spectacular. Buddhism is practiced by many in this region, and you'll see statues of the Buddha everywhere. Along the way to Baralacha-La, you'll pass through impossibly-green meadows, and huge mountain passes and canyons, and you'll come to a lake called Thasang Tso - "Emerald of a Queen's Necklace." 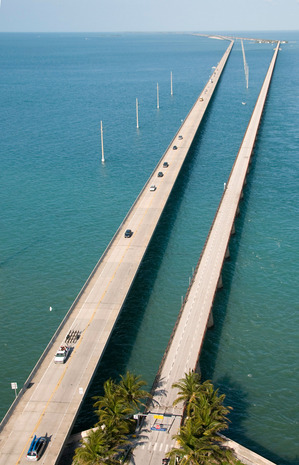 The Overseas Highway is - literally - over seas. (Courtesy Newman PR)

No. 9) SOUTH ISLAND, NEW ZEALAND - New Zealand offers some of the most majestic scenery on Earth - as anyone who's seen the "Lord of the Rings" trilogy already knows. And South Island is the most spectacular region of all here. A road trip through South Island will take your breath away around every bend, with rugged mountains; crystal-clear, rushing streams; deep-green glens; and charming villages that look like they've been stuck in time. The Southern Alps region is filled with exotic wildlife, sparkling glacial peaks, and national parks.

No. 8) THE OVERSEAS HIGHWAY, THE FLORIDA KEYS, USA - Ever travel on a highway over the ocean? Well, on the Overseas Highway, you'll be traveling on a highway with the Atlantic on the east side and the Gulf of Mexico on the west. On the 160 miles between Miami and Key West, in the string of islands called the Florida Keys, you'll be spending most of your time driving over water - in one case, over seven miles of water, on the Seven Mile Bridge. Along the way, you'll pass scenic little keys with tiny towns and great seafood shacks; islands like Marathon or Islamorada, home to world-class resorts; and you'll finally roll into Key West, the funkiest town in America. You'll see never-ending horizons of Gulf and ocean, and tiny green islets populated mostly by Keys deer. And you'll have the amazing sensation of "flying" low over the water.

On Canada's Sea to Sky Highway, you can ride through the clouds. (Courtesy Widness & Wiggins PR)

No. 7) SEA TO SKY HIGHWAY, BRITISH COLUMBIA, CANADA - Highway 99 is the Sea to Sky Highway, which winds through five distinct climatic/topographic zones in the Vancouver, Coast, and Mountains region of British Columbia. Along these 254 miles, you'll pass through coastal rain forest (dotted with native Salish villages), old logging camps, glistening alpine lakes, towering whitecaps, interesting towns like Squamish (named after the Native people who inhabited the area), and the ski slopes of Whistler, the scenic village where the 2010 Winter Olympics skiing events were held. And you'll do a lot of stopping to ogle the views! 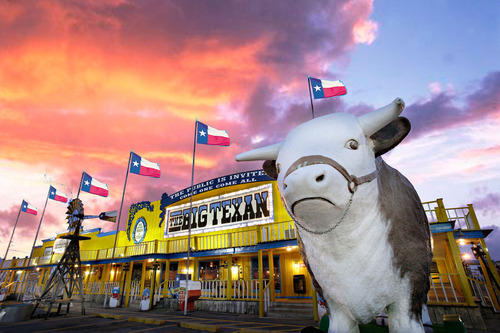 You can get your kicks on Route 66 at The Big Texan Steakhouse in Amarillo, Texas. (Courtesy Amarillo CVB)

No. 6) ROUTE 66, USA - Route 66 is not only the most famous road in America, but it's also an authentic slice of America...filled with the tacky and the treasured, the past and the present, the crossroads and junctions, the peaks and plains, the crowded cities and the wide-open spaces, the pop culture and artistic culture, and the people and places that reveal a wonderful cross-section of American life. Route 66 was established in 1926, running from the metropolis of Chicago, Illinois, through the plains of Missouri, Kansas, and Oklahoma; through the plains and badlands of Texas, the peaks of New Mexico, and the high-desert of Arizona; and on to the Golden State of California...covering 2,448 miles. Through the years, it's become the subject of famous songs ("Get Your Kicks On Route 66") and plenty of legends and folklore.

No. 5) THE AMALFI COAST, ITALY - This is the Eternal Italy, of sun-splashed Mediterranean coastline dotted with inlets and coves (and caves), white-washed little villages with cobblestone streets that have changed little over the past thousand years, ancient stone churches set into mountain rock, multi-colored mountains, hidden beaches, and views-that-go-on-forever around every bend in the road. Take a Vespa - how else would you do a road-trip in Italy? - along the Coast Road, past lemon groves and fishermen hauling in their catches, and stop for lunch at one of the ramshackle old restaurants serving superb Italian food. 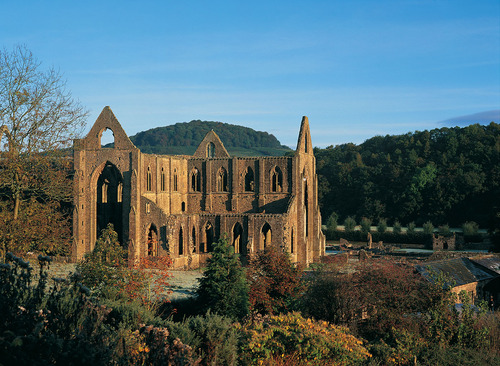 No. 4) THE TRAIL OF KING ARTHUR, WALES, UNITED KINGDOM - On this 212-mile trip around Wales, you can follow the legend of King Arthur and the magician Merlin. Arthur's tale is deeply-engrained in Welsh folklore; it's recalled in many place names, and lives on in the majestic scenery and ancient castles you'll pass. The village of Monmouth was home to the 12th-Century monk who wrote the book that first popularized the Arthur legend. You'll visit the Wye Valley, where Arthur and his knights are said to be sleeping in a cave beneath Chepstow Castle. You'll see Craig-y-Ddinas, an extensive system of caves in which many people have claimed to have seen Arthur and his knights guarding a huge treasure. And you'll see craggy peaks and fog-shrouded moors that will only enhance the feeling that Arthur's watching! 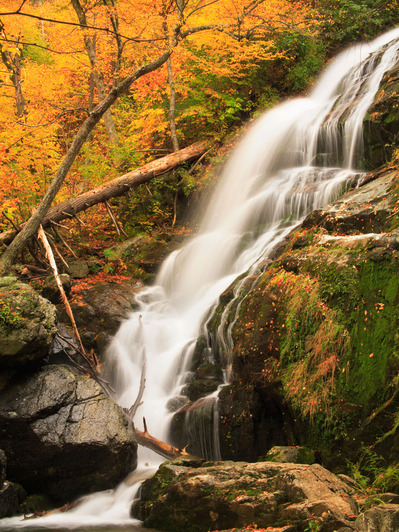 Blue isn't the only color on the Blue Ridge Parkway. (Roanoke CVB/Geiger PR)

No. 3) THE BLUE RIDGE PARKWAY, NORTH CAROLINA AND VIGINIA, USA - This has long been considered by many to be the most beautiful road in America. It winds and dips and climbs through 469 miles of the states of North Carolina and Virginia, through 4,500'-6,500-foot mountains, and past waterfalls (hundreds of them), "hollers" (little valleys), forests, and mountain villages where life has changed little, and where front porches are adorned with old wooden rockers and hand-made signs reading "Boiled Peanuts." There are interesting small cities like Roanoke (Virginia) and Asheville (North Carolina) along the way, but, mostly, colorful small towns and hamlets. And they're spread apart by miles of beautiful mountain passes, and meadows that roll into blue-ish-fog ridge after blue-ish-fog ridge. The fall foliage here is among the most beautiful in the world.

No. 2) THE ATLANTIC ROAD, NORWAY - This is - by far - the shortest road trip on our list. It's only 5.2 miles, along a stretch (if you can call it that) of Norway's Atlantic coast. But it's also one of our most breathtaking trips. Much of the way is across bridges built on landfill of rocks...which means that you'll often get waves crashing against the rocks, and sometimes against your windshield! On this 8 km mini-road, you'll pass hills, lakes, and wildlife such as seals and whales, while crossing over bridges connecting tiny islands to each other. And you'll experience that mystical bond between Norwegians and the sea, and the thunderous elements of nature and weather in which they've learned to flourish.

And now, m y pick for the top road trip on Earth... 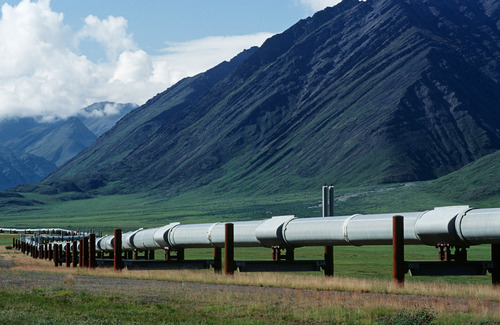 The Dalton Highway runs alongside the Alaska Pipeline, all the way to the Arctic.

No. 1) THE DALTON HIGHWAY, ALASKA - It's an 11-hour drive from Fairbanks to the appropriately-named crossroads of Coldfoot (population 10), 80 miles deep in the Arctic Circle. You'll travel on the Dalton Highway, made famous in the TV series "Ice Road Truckers." The paved road ends about an hour outside of Fairbanks, and you're traveling the rest of the way on packed gravel, past stark, jagged peaks, mighty rivers such as the Yukon, and, eventually, Arctic tundra where nothing grows. You won't pass any towns (there are none, save for isolated Native villages in the interior)...but, every hundred miles or so, you'll pass a ramshackle wooden trading post with outhouses, upon which previous users have painted some very funny  messages. The only other vehicles you'll see are the huge oil rigs traversing the highway between the North Slope oil terminals and the southern terminus of the Alaska Pipeline (which runs alongside the highway most of the way). But you may well get to see wolves and bears, and maybe a reindeer or two. As well as one of the most other-worldly landscapes on Earth.

As always, we welcome your feedback on our list!