In this joyous season amidst a not-so-joyous year - and all the emotions all of us may be feeling right now -  I find myself humming several of my favorite Christmas songs throughout the day. (And I'm glad that the radio stations play so many of them every December!) This month, every year but perhaps even more so this year, is a time for us all to take a long, deep breath, and to focus on the joyful things in our lives. And the joyous spirit that we all feel this time of year. And here are five wonderful hotels that exemplify the Christmas spirit in the warm, intimate spirit with which they're all glowing right now...

#5 - THE HERMITAGE HOTEL, NASHVILLE, TENNESSEE - This classic hotel in the Music Capital of America is a true homage to Old South elegance, with its white stone/brick façade with giant columns and bas-relief sculptures and huge vertical windows that are rounded on top. And the interior is just as elegant. Guest rooms are beautifully-furnished with woods and plush bedding and sofas, there's an excellent spa, a fitness center to work off the extra pounds you may gain at the Capitol Grille Restaurant or the Oak Bar, and an on-site gift shop. The Capitol Grille, by the way, opened its doors in 1920, and it's considered the oldest Southern restaurant in the state, with, many say, the best steaks. The Christmas Eve and Christmas dinners are famous here, in a warm, glowing ambience. And you don't have to leave Fido at home; there's a Pampered Paws program for four-legged guests...which includes a massage!  The Hermitage has been a Nashville landmark for more than a century, and it's hosted Country Music immortals from Hank Williams to Patsy Cline to Johnny Cash. There's even a classic Afternoon Tea with scones and tea sandwiches. The Country Music Hall of Fame is here, of course, along with the Grand Ole Opry. And don't forget to take a walk down Broadway in the evening, where foot-stompin', hand-clappin' Country music is busting out of every colorful honky-tonk! It won't take you long to see why Nashville is one of America's "It!" cities right now! 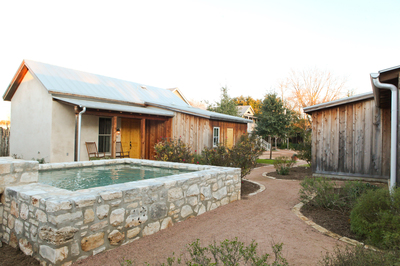 #4 - HOFFMAN HAUS, FREDERICKSBURG, TEXAS - Tucked away amidst the beautiful rolling hills and grazing horses of the Texas Hill Country is a village that looks like it came straight out of a German fairy tale. In fact, the town of Fredericksburg was actually settled by German emigrants in the mid-1800's. And Fredericksburg, to this day, remains enveloped in an Old European, dream-like setting, with a central plaza called the Marktplatz, tiny "Sunday Houses" built by settlers from the surrounding plains in the 1800's for when they came into town for church on Sundays, German restaurants with schnitzel and bakeries with strudel (it will be interesting to see which is bigger...your eyes or your appetite!), and a bountiful amount of gemutlichkeit (old-fashioned friendliness!). Fredericksburg (named after a 19th-Century German Emperor) has a German Christmas Pyramid in the Marktplatz, as well as a "55 Nights of Lights," in which the square lights up every night at 6 with Christmas lights and music. And Hoffman Haus is a scenic small hotel with an old-brick main building and some homey, traditional cabins, with each building paying homage to both German and pioneer traditions. It's a woodsy Bed-and-Breakfast, the kind with white rockers on the porches and a breakfast that's become renowned in the Hill Country. And happily, the owners also own Otto's German Bistro right down the street, where they'll be serving a Christmas Dinner highlighting the traditional German goose. 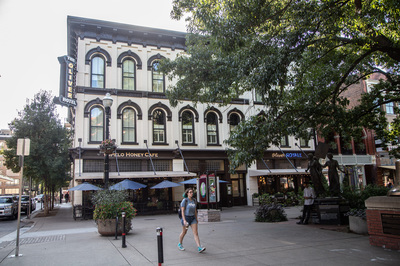 #3 - THE OLIVER HOTEL, KNOXVILLE, TENNESSEE - Knoxville's a college town, tucked amongst rolling hills and home to the University Of Tennessee, which endows it with a lot of charm as well as cultural amenities. Located in Market Square, in the heart of downtown, is an historic-but-chic boutique hotel called The Oliver Hotel. Close to major restaurants and bars, retail, live entertainment, theaters, and museums, The Oliver provides a delightful combination of Southern hospitality and an "uptown" feel. This Holiday Season, Market Square will shine with peppermint-themed lighting displays, and both visitors and residents will gather for seasonal food and drink - including a traditional Christmas Day feast - at the hotel's restaurant and bar, The Oliver Royale. The hotel also boasts the notable Tupelo Honey Cafe, with street-side views of the city, in addition to Knoxville's legendary "hidden bar." In the guest rooms, you'll find luxurious bedding, plush robes, interesting period-furniture pieces, a selection of coffees and teas, and The Oliver's very own, barrel-aged Blanton's Bourbon.  This hotel was built in 1876...as a bakery! And since then it's been everything from an ice-cream parlor to a drugstore to a dance hall. Bikes are available at the hotel. And only a mile away is Knoxville's Urban Wilderness, a vast nature reserve with pristine lakes, dramatic quarries, wildlife, and 50 miles of wooded trails. 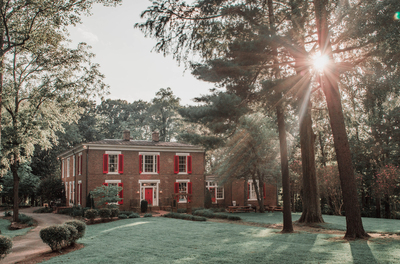 #2 - EARLY INN AT THE GROVE, ROCKY MOUNT, VIRGINIA - Ever consider a Blue Ridge Mountain Christmas? Well, you should, especially at this time of year, when you're liable to spend Christmas in a drop-dead-beautiful mountain range craped with glistening snow! Rocky Mount is one of the prettiest towns in the Blue Ridge...and it's a walker's delight. Head to Twin Creeks Distillery for craft moonshine cocktails; dine at the Rocky Mount Burger Company one night; enjoy the hidden treasures tucked along the local shops and farmer's market on Main Street; and check out The Harvester Performance center for socially-distant events. And during Christmas Season, the village celebrates Festive Fridays, with events such as Flannel Friday, Christmas Characters, and Ugly Christmas Sweaters. The Early Inn at the Grove itself is an ode to classic Southern red-brick architecture, as well as the sweet hominess associated with it. This hotel was built amidst a pine forest in 1854, and still celebrates the elegance and gentility of that age with individually-themed rooms - only six guest rooms in all - some with fireplaces. There's a library for you, as well as a firepit for s'mores. And Christmas Dinner will feature oven-roasted turkey, Honey Baked Virginia (what else?) Ham, Roast Beef, baked macaroni and cheese, southern style green beans, collard greens, sweet potato casserole, herb-roasted red potatoes, rolls straight from the oven, and melt-in-your-mouth desserts.

And now, here's my choice for my top Christmas spot in America this year... 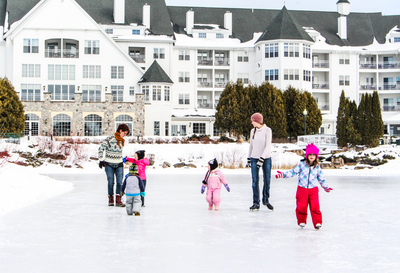 #1 -  THE OSTHOFF RESORT, ELKHART LAKE, WISCONSIN - This Nature-blessed wooded lake upon which The Osthoff Resort sits has long been considered one of the most scenic spots in a state filled with them. It's a pretty safe bet that Christmas here will be a white one, and this homey hotel and the surrounding woodlands, this time of year, are bathed in a golden glow that presents a truly ethereal scene. All guest rooms here are suites, with kitchens and fireplaces (imagine Christmas Eve in front of a glowing fire!), and all have either woods or lake views. There are three excellent restaurants and a lounge; and if you don't mind putting your coat back on, beautiful winter views from Osthoff Lake Deck. In addition, there are a ton of great amenities here, among them a gift shop, fitness center, the excellent Aspira Spa, an arcade and game room, fun family activities, and even a cooking school! And the kids will wake up on Christmas morning to find a stocking full of treats, games and a special gift from the jolly old elf himself! If you're here on Dec. 19, the resort will offer horse-drawn wagon rides through the quaint lakeside village of Elkhart Lake. On Christmas Eve, families are invited to enjoy a complimentary hot-chocolate bar, Christmas cookies and live piano music in the Elk Room. Christmas Dinner at The Concourse Restaurant is always a very special one. And the Christmastime views out of any window are generally "Winter Wonderland."