The holiday is now celebrated in many countries around the world. And here, in my opinion, are the top 10 places in which to celebrate it...

No. 10: PRAGUE, THE CZECH REPUBLIC - The capital of the Czech Republic is, in many ways, a two-sided city. With its stately spires and rounded green domes and red-tile roofs, it still has the air of a Medieval city. Yet, discerning international travelers have begun to discover that there's a lot going on under those domes and spires...including a lively nightlife, a burgeoning foodie scene, and a vital cultural life. And, for sure, a wonderfully romantic aura. The Old Town, centered around huge Old Town Square and the cobblestone streets leading into it, is filled with architecture reminiscent of a Grimm's Fairy Tale - including a majestic old castle. While crossing the Charles Bridge over the Vltava, you can hear the chime of a centuries-old clock tower. And if you love good beer, you'll love Prague!

No. 9: THE TAJ MAHAL, AGRA, INDIA - This is actually a serene place of remembrance. But the sheer magnificence of the place - and the legend of love accompanying it - bring romantics here from all over the world. Built by Emperor Shah Jahan in memory of his wife Queen Mumtaz, it's one of the Seven Wonders of the World. The Queen died in 1631, while giving birth to their 13th child. Legend has it that Shah Jahan remained secluded for a year after her death, and when he finally emerged, his black hair had turned gray. He immediately set about building the most ornate edifice in history in her honor - a task that took 22 years. And, though the story is sad, this exquisite monument to love will take your breath away. 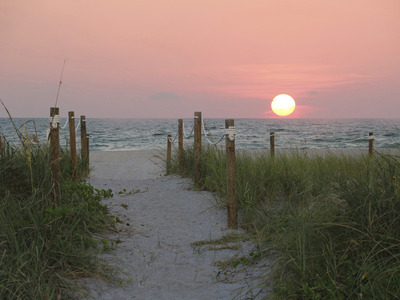 No. 8 - "TWEEN WATERS INN, CAPTIVA ISLAND, FLORIDA, USA - In America's fastest-growing state, Captiva Island remains a precious little slice of Old Florida. It's a tiny village whose residents live mostly in beachside mansions or Caribbean cottages, and its one main intersection is lined with interesting general stores, specialty shops, and intimate restaurants such as KeyLime Bistro. 'Tween Waters has been a Captiva landmark since the forties; it's a friendly, comfortable inn on the Gulf of Mexico, with two restaurants and a nice pub. There's a larger unit with hotel rooms with an "Old Florida" accent, and 19 quaint cottages painted in brilliant greens, purples, reds, or blues, each with seaside (Gulf of Mexico) or bay views. These cozy cottages make ideal Valentine's Day getaways. And all you have to do to get to one of  Florida's best beaches is cross the street. 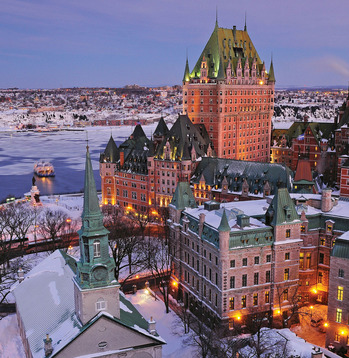 The Chateau Frontenac is the queen of Quebec City.
(Courtesy JFBergeronEnvFoto)

No. 7: FAIRMONT LE CHATEAU FRONTENAC, QUEBEC CITY, QUEBEC, CANADA - If you approach Quebec City by car, it almost seems like a mystical illusion. There, atop the cliffs towering over the St. Lawrence Seaway, sits a Medieval French city of stone buildings with green turrets and red roofs. And standing atop this city is one of the most legendary hotels on Earth - the Chateau Frontenac. This hotel - every bit the luxurious palace it looks like - was built in 1893, and named after the Count of Frontenac, a flamboyant early French governor. It's since played host to celebrities, kings, and statesmen (President Roosevelt met with Prime Minister Winston Churchill here in 1943). The narrow alleys of Quebec City spread out behind it, as do the four-hundred-year-old fortress walls built by the French. The rooms are classic-elegant. There are five atmospheric restaurants and lounges, one of which overlooks the St. Lawrence. And nearby are the city's main street, the beautiful Grand Alee, and hundreds of romantic restaurants such as Aux Anciens Canadiens. You can spend Valentine's Day in the capital of "New France." And who does "romance" like the French?

No. 6: VENICE, ITALY - There's nowhere else on Earth quite like Venice. The 21st Century can't change the eternal face of Venice, because, as the city's on water...there's nowhere to build! Venice is a classic Middle Ages fantasy, and a bucket-list item for true romantics. Here, spires and turrets sit proudly atop ancient buildings. Couples glide down canals in distinctive gondolas, propelled by colorfully-costumed boatmen. Romantics linger on the ornate bridges over the canals, each of which connects with alleys that haven't changed in a thousand years. The city's filled with lively squares such as St. Mark's. And what could be more romantic than celebrating Valentine's Day while watching the people-parade from a sidewalk cafe, and enjoying a special Italian red?

No. 5: BUENOS AIRES, ARGENTINA - Buenos Aires is a European city in South America. Here, street life is the life...and the streets are a constant, colorful swirl of Latin American passion and la buena vida. Buenos Aires is lively, noisy, bustling...a non-stop festival. It's the home of the tango, of course, the most passionate, provocative, and downright-sexy dance in the world, danced on the streets as well as in the clubs. (And it's the home, too, of hundreds of studios where you can learn it.) South American barbecue (Argentine beef!) is big here, but so are a dozen other ethnic cuisines. The architecture is a colorful mix of European elegance and Spanish/South American Colonial, with tremendous statues and monuments, broad boulevards, and streets lined with sidewalk cafes. And there are colorful neighborhoods such as La Boca, B.A.'s original Italian section. 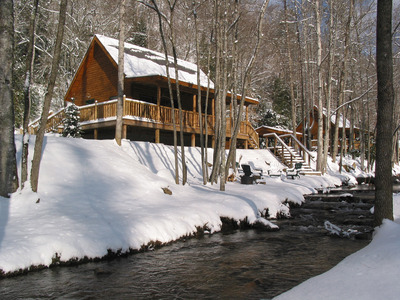 If you're looking for a secluded hideaway in a winter wonderland...
Lands Creek is it! (Courtesy Lands Creek Log Cabins)

No. 4: LANDS CREEK LOG CABINS, BRYSON CITY, NORTH CAROLINA, USA - Perched atop a mountain in the Great Smoky Mountains, above the picturesque town of Bryson City, is a little piece of Paradise. Lands Creek is a winter wonderland in February. These authentic cabins were built in the rustic style, but with every modern convenience. They're cozy and romantic, with fireplaces inside, and hot tubs outside on the deck. When you go outside at night, you'll see swirls of shining constellations splashed against a black sky, punctuated by 100-foot-tall pine and oak trees. When you sit in front of a fire glowing in the hearth, you'll be surrounded by beautiful crafts created by local artisans. When you retire for the evening, you'll fall asleep to the sounds of Lands Creek rushing below your stilted-cabin. And when you go down the mountain, you can enjoy the cozy restaurants and interesting shops of Bryson City, which is now undergoing an infusion of even more interesting shops and restaurants (and where you can also take a romantic nighttime ride on the Great Smoky Mountains Railroad). Lands Creek Log Cabins was made for Valentine's Day! 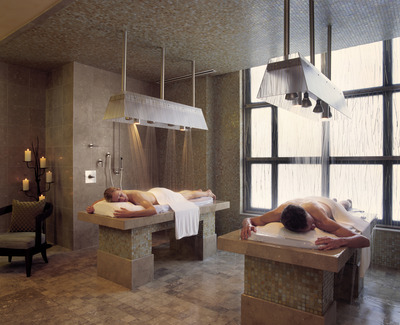 At Beaver Creek Resort...
how about a couples' spa treatment for Valentine's Day?

No. 3 - PARK HYATT BEAVER CREEK RESORT & SPA, BEAVER CREEK, COLORADO, USA - Take a first-class, internationally-known hotel brand. Then pop it in the middle of one of America's most beautiful towns...which just happens to be situated in one of America's top ski areas, and one of its most beautiful natural settings. And fill this beautiful town up with stylish restaurants and boutiques and galleries, sitting in a European village with a town square (well, in this case, an ice-skating rink!). The Park Hyatt Beaver Creek is fronted by this Old-European town (into which a chef from one of the restaurants strolls every afternoon with a tray of warm cookies for passers-by), and backed by the ski slopes. You can virtually ski into the hotel...and then top it off with a gourmet dinner at 8100 restaurant. After that, you can take your special one to the outdoor firepit for some s'mores. And after that, of course, you can retire to an elegant room with a fireplace. 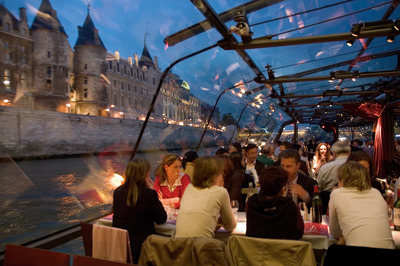 No. 2: PARIS, FRANCE - Ah, Paris...the "City of Light" is also the City of Love. You might start off your evening with a wonderful dinner in an intimate old café which you enter by going down several steps. Afterward, you might take your partner for a leisurely stroll along the Seine, watching as the beautifully-lit Bateau Mouche riverboat glides by, and then drifts away into the distance. (Or you might take your partner for dinner on the Bateau Mouche!) Afterward, you might sip a coffee - or a good Burgundy - in one of the sidewalk cafes dotting the Left Bank. You can walk the Champs Elysees - widely-considered the most beautiful (and fashionable) street in the world. You can behold the spectacular Eiffel Tower, all lit up, piercing a black-velvet sky beyond it. Paris is eternal...transcendent...romantic...sensual...tempestuous...evocative. And it's been enchanting lovers for centuries.

And now, my choice for the best place on Earth for a romantic Valentine's Day getaway... 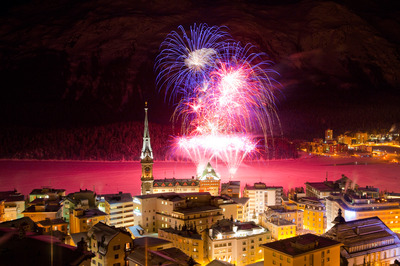 No. 1: ST. MORITZ, GRAUBUNDEN, SWITZERLAND - Why not spend your Valentine's Day in one of the best ski resorts in the world? St. Moritz is legendary for its slopes...and for its culinary treasures and for its delightful shops (Swiss chocolate!). If you're looking for secluded romance - why not spend it in an inn without Wi-Fi? The unique Hotel Restaurant Lej da Staz is the smallest hotel in St. Moritz, and the epitome of a romantic, fashionable hideaway The ten rooms are decorated in traditional Swiss Alpine style, and the restaurant offers an intimate ambience. Or, you might choose the hotel where Swiss tourism originally started. The renowned Kulm Hotel St. Moritz introduced the winter "season" in the Alps in 1864. It's a luxurious hideout, with a classic alpine interior and a landmark tradition. Or, you might choose a romantic mountain inn like the Paradiso Hut...up here, they say, you're much closer to heaven. Wherever you choose in St. Moritz, however, you'll find a romantic ambience in a picturesque Swiss mountain village...with great restaurants, breathtaking scenery, and the chance to have a skiing Valentine's Day!

Well, those are my choices. But what about yours? We'd love to hear from you! What are your favorite Valentine's Day getaways?