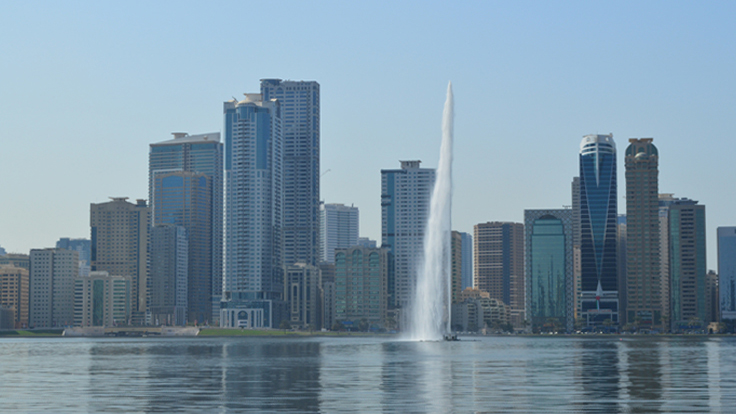 
With Dubai's real estate market benefitting tremendously from the improved economic conditions, tenant demand has once again begun to ripple across the border into Sharjah, Dubai's northern neighbor and the United Arab Emirates' third largest state.

Like previous cycles, we are seeing a trend of migration from Dubai to Sharjah, as tenants seek out more affordable housing options, with submarkets along the Dubai-Sharjah border, such as Al Nahda and Al Majaz, seeing the sharpest upturn in demand.

"Rents [in Sharjah] will continue to maintain their upward momentum."

Like elsewhere in the UAE, Sharjah was impacted by the recession, with construction work on several residential and office schemes being halted during the depths of the crisis. Although many of these schemes are once again seeing resumption in construction, the delivery timelines mean that there will be no immediate relief from the current supply dearth, suggesting that rents will continue to maintain their upward momentum. This will be particularly noticeable in the city center, where occupancy levels of close to 100 percent are being reported across most residential buildings.

Al Nahda has already begun to experience the impact of this, with rents rising by 5.8 percent in Q3 alone, leaving them 21.7 percent up on this time last year. Similarly, Al Majaz has recorded a 4.8 percent increase in average rents over the same period, taking them 15.8 percent higher than Q3 2012. Despite these gains, rents in Al Majaz are significantly more affordable when compared to most locations in Dubai. Average rents for two-bedroom apartments in Al Majaz stand at AED 52,000 per annum. This contrasts with rents in Dubai of between AED 51,000 per annum (at International City, Discovery Gardens and the International Media and Production Zone) and AED 162,000 per annum (in Downtown Dubai, the Palm Jumeirah, the Dubai International Financial Centre and Dubai Marina), for lower end and high end two-bedroom apartments, respectively.

Adding to the demand being driven by relocations from Dubai are families relocating from some of the more troubled parts of the region. They appear to be honing in on Sharjah and prefer it to neighboring Dubai, primarily due to the emirate's strong cultural identity and family friendly amenities. The recently upgraded facilities at Al Majaz waterfront, along Buhairah Corniche have helped to add to the lure of Sharjah.

The original 231,000-square-meter, 20-year-old Al Majaz Park was completely redeveloped by the Sharjah Investment and Development Authority (Shurooq), with the first phase opening during the spring last year. The choreographic dancing fountains, mini golf course, selection of al fresco dining options, which include the likes of Baha Fresh, TGI Friday's, Tim Hourtons and Fat Burger, along with the grand Al Majaz and nearby Al Noor mosques have translated into heightened desire to live in the area. During the first six months of 2013, Al Majaz Waterfront received 1.2 million visitors, underscoring its appeal. The Al Majaz area in general is unique in the UAE, with the entire area being linked by walking paths and continuous parks and gardens around Buhairah Corniche, which lends itself well to families with children.

Steve Morgan is head of the Middle East for Cluttons, the international property consultancy.