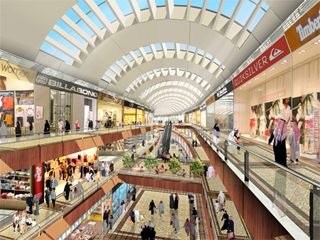 Commercial News » Commercial Real Estate Edition | By Alma Kadragic | October 29, 2008 2:59 PM ET
Signup for Our Weekly Newsletter »
(DUBAI, UAE) - The opening of Dubai Mall, the largest shopping center in the Middle East, has been postponed again because traffic systems, telephones, and some stores are not ready. The original opening date of August 28 was pushed back to October 30; today the opening that was scheduled for tomorrow was moved to next Tuesday, November 4. Until Dubai Mall actually opens for the public, these two artist's renditions give an idea of how it might look inside.

Nabil Daud, regional CEO of British toy store Hamleys, which will open its first store outside of the UK at Dubai Mall, said, "I am happy [the opening has been delayed]. It gives us more time to prepare."

Dubai Mall is part of the $20 billion Downtown Burj Dubai project, the 500-acre development from Emaar Properties through its Emaar Malls division. At its centre is the Burj Dubai, the world's tallest building, still under construction at more than 160 stories.

An estimated 30 million visitors are expected during Dubai Mall's first year. The center will feature more than 1,200 stores and 160 food and beverage outlets once complete. Of the 1,200 retailers, more than 165 are opening in Dubai or the Middle East region for the first time. They include French retailer Galeries Lafayette and US department store Bloomingdale's as well as upmarket UK supermarket chain Waitrose.