The number of people visiting the Caribbean from January to July reached 15.6 million, barely shifting from the number of visitors last year, as the market continues to face challenges.

The traveler figures were released last week during the Caribbean Tourism Organization's State of the Industry Conference held on the French island of Martinique, Travel Weekly reports.

"The U.S. market had a marginal growth of 0.8 percent, which totaled 7.8 million visitors and represented a market share of 50.4 percent, up from 49.6 percent in 2012," Beverly Nicholson-Doty, chairwoman of the Caribbean Tourism Organization said at the conference.

Even though the gain is minimal, the organization expects strong performance from the U.S. market in 2014, based on advance bookings.

Overall, the region has shown signs of recovery following performance declines during the economic depression. The last Caribbean tourism report from CTO in February showed almost 25 million tourists visited the region in 2012, increasing 5.4 percent from 2011 and marking the largest number of "stayover" visitors in five years.

As the region reports an increase in visitors, investors are returning to the Caribbean. Earlier this month, Egyptian billionaire Naguib Sawiris announced plans to build three five-star hotels in the island country of Grenada.

The region also reported an increase in demand for marina berths, leading to new residential projects.

The Caribbean, however, is not fully recovered and still faces challenges, analysts say.

CTO's task force is set to meet in November with members of IATA and the Latin American & Caribbean Air Transport Association to debate possible solutions. 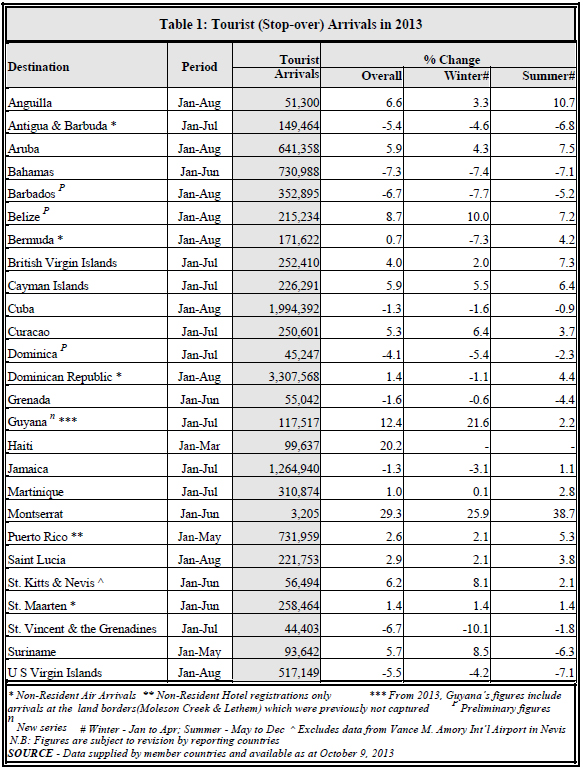