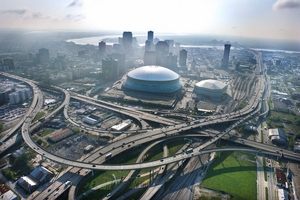 (Washington D.C.) -- Of the 10 fastest growing counties in the nation between April 1, 2010, and July 1, 2011, two were in the upper Midwest and two were in Louisiana, according to some recent data from the U.S. Census Bureau. The two Midwestern counties that made the top-ten list were Williams, N.D., which ranked third, and Dallas, Iowa, which was seventh.

Meanwhile, the presence of Louisiana counties St. Bernard (No. 2) and Orleans (No. 9) among the 10 fastest-growing counties in America provides evidence that the New Orleans area continues to rebound from the devastating effects of Hurricane Katrina.

Another fast-growing county was in the Pacific Northwest: Franklin, Wash., which was fifth. Two county equivalents in Virginia, the independent cities of Manassas Park and Fredericksburg, checked in at fourth and sixth, respectively.

The top 10 numeric gainers were all in the Sun Belt, with four in Texas: Harris, Dallas, Bexar, and Tarrant. Another four were in Southern California: Los Angeles, Riverside, Orange and San Diego. Rounding out the list were Maricopa, Ariz. and Miami-Dade, Fla.

Following are some other interesting findings from the recent Census Bureau look at county growth: