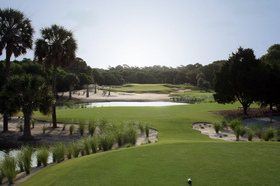 Indeed, Bald Head Island's major renovation was one of the top five best renovations completed in America in 2011, according to Links magazine. Links placed the changes to Bald Head Island's golf course design right behind the renovation of famed Pinehurst No. 2, saying Bald Head's renovated course is a "phenomenal re-do."

The Bald Head Island Club is the only golf course and golf club on Bald Head Island, a barrier island located two nautical miles off the coast of southeastern North Carolina. The 12,000-acre resort island is only accessible by ferry from Southport, N.C. or by private boat. Once on the island, transportation is limited to golf carts, bicycles and pedestrian traffic. The island has 14 miles of beaches, tidal creeks and an ancient maritime forest. 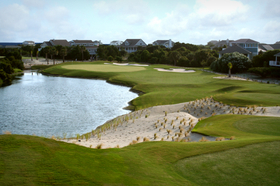 The Bald Head Island Club course, which opened in 1974, was originally designed by golf course architect George Cobb, who found international fame when he designed the par-3 course at Augusta National. Over the years, strong ocean winds, intense summer sun and thousands of rounds of play had taken their toll on the North Carolina golf course.

In 2010, award-winning architect Tim Cate was selected to revitalize the course and address some undesirable design issues. Cate was able to maintain Cobb's classic style and routing, while increasing the playability of the challenging course. He widened fairways, modified greens, added more visual excitement with elevation changes, opened up more views of the ocean, and enhanced the course in other ways. While preserving the character of Cobb's original design, he produced a course that takes full advantage of the area's beauty, and is more in tune with its natural surroundings than the original Cobb design.

"We feel that Tim completed an extraordinary renovation, and everyone who's played the course since it reopened has raved," said Robert Norton, general manager of the Bald Head Island Club. "But it is really gratifying to discover that national media appreciate the artistry that it took to create this result. As would be expected, the renovation of Donald Ross' great Pinehurst No. 2 was the most high-profile project done in 2011. It's pretty exciting to be put in that same league. As Links noted, Tim's changes to Bald Head have resulted in a course that has a 'much more modern feel and is more visually appealing.' It's now a course that can be fun for any level of golfer, as well as present a championship challenge for professional golfers and gifted amateurs." 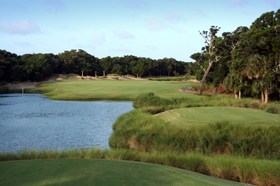 The Bald Head course renovation resulted in sweeping vistas of dunes and the ocean beyond. Lagoons come into play on 14 holes. Elevations change as much as 35 feet throughout the course, and some holes have 20-foot high dunes as backdrops to their greens. The pristine layout includes new, laser-leveled tees re-grassed with Celebration Bermudagrass, and large and undulating greens re-grassed with MiniVerde Ultradwarf Bermudagrass.

"There are only a few championship golf courses on the Carolina coast that can boast views of the Atlantic Ocean from seven tees," said Norton. "Tim has taken a great layout in a great location and made everything on it and around it better. He's created a course that delivers an awesome challenge from the back tees when the ocean winds are swirling. But he's also taken care to make sure that those playing from the other tee boxes are tested, yet still have a chance to shoot a good score. The result is a course that is breathtakingly beautiful, challenging and fair, and we're thrilled that Links has recognized that accomplishment."

Equity memberships in the Bald Head Island Club are available with the purchase of a real estate or boat slip membership. Golf packages are available and limited playing privileges are extended to those leasing properties through Bald Head Island. In addition to the golf course, the Club offers a 10-acre practice facility and many other amenities.