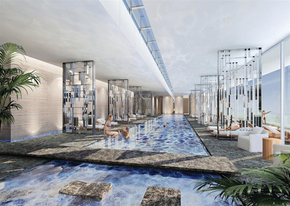 Four Seasons Hotels and Resorts recently celebrated a homecoming of sorts with the opening of a new 259-room flagship hotel in Toronto, where the company was founded more than 50 years ago.

"The new Four Seasons Hotel Toronto is a showcase for the next generation of Four Seasons experiences, helping to exemplify where we're headed in the future," says President and Chief Executive Officer Katie Taylor. "It gives us all a sense of pride to display the very best of Four Seasons, right here in our hometown."

The global footprint of Four Seasons, which now spans five continents and 36 countries, is the result of a development strategy that focuses on destination Four Seasons guests increasingly want and need to travel. In 2011, Four Seasons signed 14 letters of intent, more than any other year in the company's history.

"Our growth strategy is driven by opening the right hotel, in the right destination, which also drives the right economics for the hotel owner," says Scott Woroch, executive vice president worldwide development. "We've never taken a cookie-cutter approach as we strive towards opening our 100th hotel and beyond in the next ten years."

China is one of the largest areas of focus for the company going forward, representing more than 20 percent of projected openings for the next four years. A new property in Guangzhou opened in July 2012, and additional hotels are slated to open in Beijing and Shanghai Pudong in the coming weeks, as well as a hotel in Shenzhen in the near future.

Four Seasons first entered Asia with the acquisition of Regent Hotels in 1992. After refining the Asian portfolio and rebranding Regent hotels to Four Seasons, the company focused on opening branded hotels in major city centers and exotic resort locations throughout the region.

The Middle East is another region that has grown significantly since the first hotel opened in Cairo in 2000. Today, it represents more than 10 percent of the company's portfolio. Future properties include Four Seasons Hotel Baku, Azerbaijan opening in September 2012, and Four Seasons Resort Dubai at Jumeirah Beach, opening by the end of 2014.

Naturally, North America is where Four Seasons first got its foothold. Today, nearly every major city in the U.S. boasts a Four Seasons hotel, with the most recent opening of Four Seasons Resort Rancho Encantado in Santa Fe, New Mexico. The Americas continues to be a focus for the future with new properties planned in Toronto, Orlando, Brazil, Mexico and the Caribbean.

"A fundamental element of our success has been our ability to find new members of Four Seasons who share our core values in every corner of the world," says Taylor, whose company now numbers 88 hotels in 36 destinations. "From Toronto to Beijing, Buenos Aires to St. Petersburg, our people create highly customized experiences for our guests and homeowners that have built tremendous loyalty in our brand and demand for what we offer in more and more places around the world."