The number of hotels sold in the U.S. was up 41 percent year-over-year in the first two months of the 2013, according to Real Capital Analytics' latest hotel trends report.

The largest increases were in portfolio sales, the firm reports. A dozen portfolio sales totaling $2.3 billion have closed in the first two months of 2013 with another $2.1 billion pending.

Two of the largest property sales that closed in February involved full-service, independent hotels in Boston and Washington, D.C. Loews purchased the Back Bay Hotel in Boston for $84.4 million

from The Doyle Collection of Boston and The Madison Hotel in Washington, D.C., for $125 million from Jamestown Properties based in Germany, RCA reports.

Based on preliminary data, RCA believes total sales figures for the first quarter of 2013 will be far above 2012, reflecting shifts taking place in the hotel buying market. Although public REITs slowed down their acquisition activity in 2012, there was more buying by equity funds and private investors.

Greater access to financing from banks and CMBS lenders helped encourage acquisitions from the private sector in 2012, RCA reports. Private investors purchased $6.7 billion worth of hotels, up 26 percent from the previous year. Non-listed REITs are included in the private sector category and accounted for about 20 percent of the 2012 total.

Equity funds continue to buy hotel portfolios, especially in the limited service sector. Over $5.4 billion of hotels were purchased in 2012, up 41 percent over 2011. There has been a significant shift into secondary markets, where almost two thirds of the acquisitions were made in 2012. 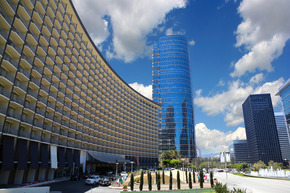 Listed hotel REITs were the only capital sector where acquisitions dropped significantly in 2012. They had higher capital costs and increased competition in the markets where they were active. Acquisition volume of listed REITs totaled $3.6 billion in 2012, down 47 percent from the prior year and, at 18 percent, their market share was the lowest since 2009.

One major seller is Starwood, which this week announced plans to sell as much as $3 billion worth of its hotel portfolio.