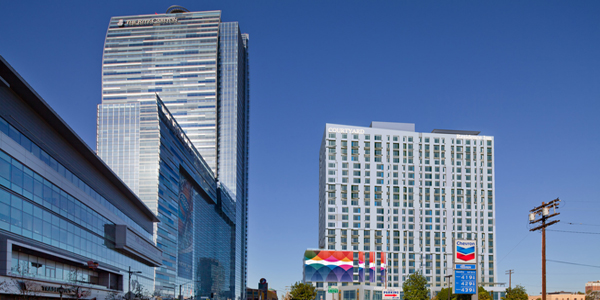 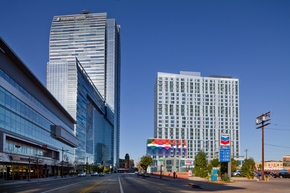 Nearly 400 guest rooms will soon be added to the bustling downtown Los Angeles hotel market now that work is under way on a 373,000-square-foot high-rise that will host a Courtyard by Marriott and a Residence Inn by Marriott. American Life Inc. and Williams/Dame & Associates are behind the project, which carries a development price tag of $172 million.

At a March launch event, developers announced that the new hotel development - comprising a 23-story tower housing a 174-room Courtyard by Marriott and a 218-room Residence Inn by Marriott, including 11,754 square feet of meeting facilities and 5,100 square feet of restaurant space - is slated to open in summer 2014.

The project is expected to create more than 1,000 jobs, generate millions in revenue for the city of Los Angeles and serve as a significant boon to the city's convention business and the tourism industry.

Adjacent to L.A. Live, the hotels will be at the corner of Olympic Boulevard and Francisco Street on an entitled site the developers purchased from AEG, the owner/operator of L.A. Live. L.A. Live is a 4-million-square-foot sports, residential and entertainment district which has further fueled the renaissance of the downtown area that began when the company broke ground on Staples Center in 1998.

The hotels will be managed by Marriott International and will be the only nationally-branded extended-stay and select-service venues within walking distance of the Los Angeles Convention Center. The Residence Inn will be a good option for families, while the Courtyard offers a variety of price points, appealing to a diversity of guests.

The project is being built by SODO Builders LA LLC, with architecture by Portland's GBD Architects, Structural Engineering by DCI and interior design by Seattle's Degen & Degen.

Williams/Dame & Associates is a Portland-based real estate development firm led by Homer Williams and Dike Dame. The firm is noted for leading the redevelopment of the "South" neighborhood, a new high-rise community in South Park in downtown Los Angeles, as well as the Pearl and South Waterfront Districts in Portland, Oregon.