-
According to the June 2017 Zillow Real Estate Market Report, the typical U.S. home is worth over $200,000 for the first time ever. The national median home value is now $200,400, up about 7 and a half percent since this time last year.

High buyer demand coupled with fewer homes for sale is driving up home values across the country -- there are 11 percent fewer homes on the market than a year ago, the greatest drop in inventory since July 2013. National home values have been rising at over 7 percent annually for the past five months, with many markets consistently rising in the double-digits.

During the height of the housing bubble over a decade ago, the median U.S. home value peaked at $196,600 but never surpassed the $200,000 threshold until now.

"The national housing market remains red hot and shows no signs of slowing, even as some local markets like the Bay Area have noticeably cooled," said Zillow Chief Economist Dr. Svenja Gudell. "But even in areas where the housing market has slowed, home values are at or very near peak levels, selection is limited, demand is high and competition is fierce. Given these high costs and high competition, the most important thing you can do is get your finances in order so you know what you can comfortably afford, and find an agent who has experience with bidding wars and will help you stand out in a competitive market, especially if you're buying for the first time."

San Jose, Columbus, Ohio and San Diego reported the greatest drop in inventory since this time last year. Home shoppers in San Jose will have nearly 40 percent fewer homes to choose from than a year ago, and there are 33 percent fewer in Columbus and San Diego.

Median rent across the nation has been holding steady at about a 1 percent annual gain for the past six months -- the median rent across the country is now $1,422 per month, up just over 1 percent annually. Seattle, Los Angeles and Sacramento, Calif. reported the greatest annual rent increases among the 35 largest U.S. metros. In Seattle, rents are up 5 percent to a Zillow Rent Index (ZRI) of $2,142 per month. Median rent in Sacramento is up 4.5 percent, and in Los Angeles, median rent has risen 4 percent.

Median rent is falling in 12 of the 35 largest U.S. metros, falling the most in Pittsburgh (down 4 percent) and Houston (down 3 percent). Miami, San Jose and San Francisco are also among the metros where rent is cheaper this year than last.

In June, mortgage rates on Zillow ended at 3.76 percent, the lowest month-ending rate since October 2016. Rates in June were the most stable they have been in ten months, holding within a 9 basis point range over the month. Mortgage rates were at or near their monthly lows of 3.67 percent for most of the month. Zillow's real-time mortgage rates are based on thousands of custom mortgage quotes submitted daily to anonymous borrowers on the Zillow Mortgages site and reflect the most recent changes in the market. 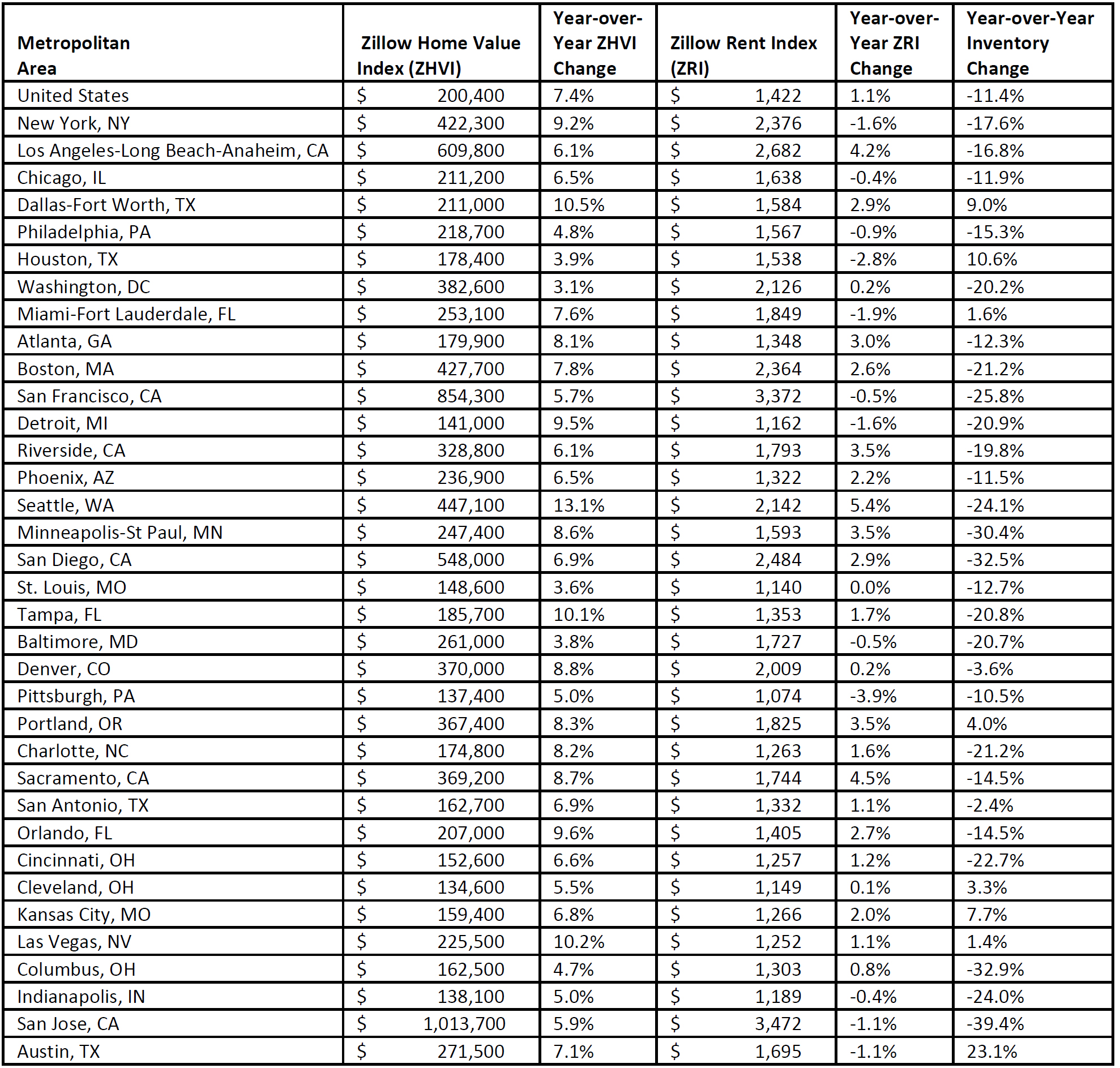