Property portal Zillow is reporting this week that young college graduates in the U.S. are more likely to be living with their parents than they were before the housing bubble, especially in places that had a more exaggerated boom and subsequent crash.

According to a new Zillow report, analysis of Census data finds the share of college graduates in their twenties increased the most between 2005 and 2016 in Las Vegas and Riverside, California. Nationally, 28 percent of recent college graduates live with their parents, up from 19 percent in 2005.

When the housing bubble was at its height, it was much easier to get a loan, and the building boom meant there were plenty of homes for buyers. For young college graduates at the time, moving out was a more manageable option. Today, tighter lending standards, high home prices and constrained inventory make breaking into the home-buying market more difficult for recent graduates.

Between 2005 and 2016, the share of recent college graduates living with parents increased from 13 percent to 39 percent in Las Vegas, which experienced one of the most dramatic boom and bust cycles among the nation's largest markets. Near the end of 2004, homes were gaining nearly 50 percent in value each year. When the market collapsed, home values plunged by 62 percent, more than any other major U.S. market. Riverside, Calif. saw a similarly intense bubble and crash. The share of recent graduates living at home there increased from 27 percent to 51 percent in 2016.

"In the mid-2000s, lending standards and an abundant supply of homes made it easier for recent grads to move out and form their own households instead of living with their parents," said Zillow senior economist Aaron Terrazas. "Those market conditions have changed drastically over the past decade as we went through the housing bust. Adding to that, as many millennials who recently graduated into the Great Recession can attest, underemployment or more precarious jobs make it much harder to save up enough to move out. When rents keep climbing and competition is fierce for the most affordable homes, living with mom and dad can be a good option to build up some savings."

As more young graduates live with parents, the share living with a romantic partner was on the decline. In every large metro, a smaller share of college graduates in their twenties live with a partner than did in 2005. Las Vegas had the biggest decline in the share of recent graduates living as a couple, falling from 47 percent to 29 percent. 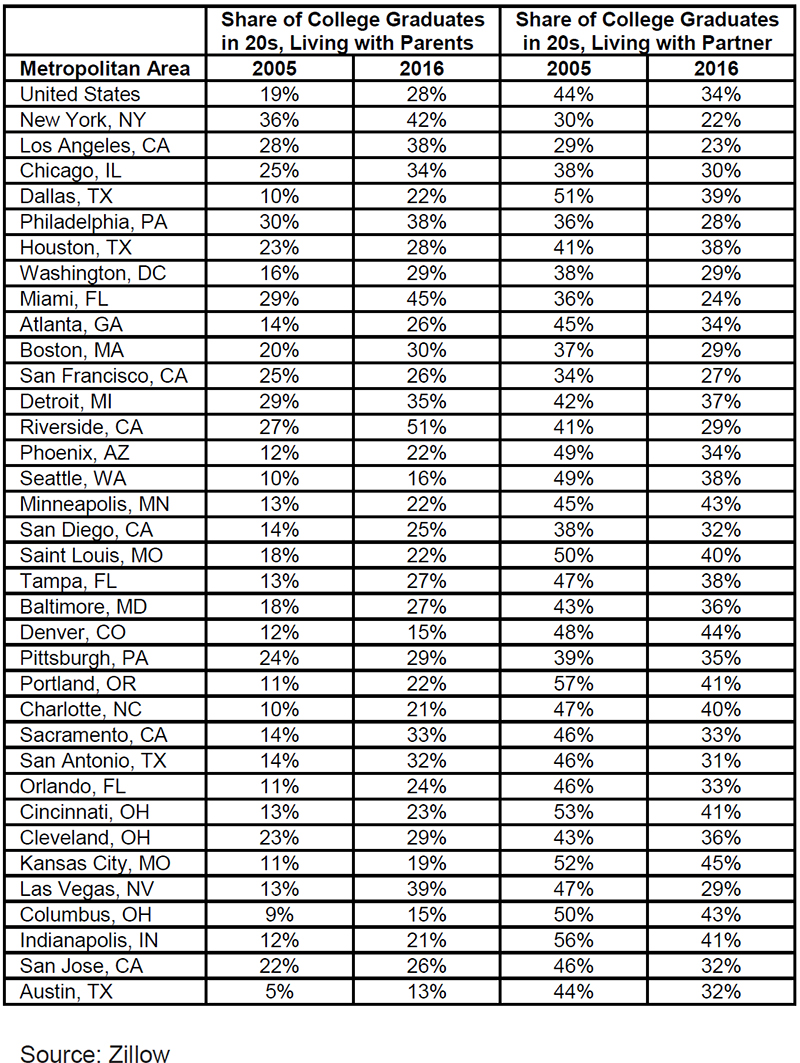