Home Price Appreciation Slowed in Most U.S. Markets in 2018

According to Zillow's December 2018 Real Estate Market Report, annual U.S. home value growth slowed in more than half of the nation's largest housing markets since this time last year. Seattle and San Jose, Calif., saw the biggest declines in appreciation over the past year.

In several more affordable Southern markets, home value appreciation accelerated over the past year. In Atlanta, for example, appreciation increased from 8.1 percent at the end of 2017 to 13.2 percent in December 2018.

Even as appreciation slowed in 19 of the nation's 35 largest housing markets, national home value growth is faster than it was when the market was coming out of the Great Recession. The fastest home values grew in the earliest years of the recovery was 7 percent in early 2014.

"Looking at the nation as a whole, housing appreciation seems stabilized at an arguably aggressive pace," said Skylar Olsen, Zillow Director of Economic Research and Outreach. "The exceptions to the rule are the metros that saw the fastest appreciation over the past few years, where home values far outpaced incomes. Employment growth continues, but that kind of extreme home value growth isn't sustainable, and home buyers' willingness and ability to outbid each other is falling back fast. We expect continued slowdowns in those expensive coastal markets. A three-month trend in increasing inventory ended, telling buyers that the pendulum hasn't fully swung in their favor for this year's home shopping season."

The median rent increased 1.4 percent from the previous December to a Zillow Rent Index of $1,460. This was the biggest annual increase in rents since June 2018. Orlando rents saw the biggest jump, up 6.4 percent over the past year to $1,496. Rents fell 1.3 percent in Portland, Oregon.

Inventory fell slightly over the past year, down 0.4 percent since December 2017. This came after three consecutive months of gains in the number of homes for sale, suggesting that national sustained inventory growth is not here yet. Still, several major markets that were starved for homes for sale are seeing big gains, led by San Jose (up 47.6 percent), Seattle (up 32.9 percent) and San Diego (up 32.2 percent).

Mortgage rates on Zillow ended December at 4.30 percent, which was also the lowest rate of the month. Rates were highest at the beginning of the month, at 4.56 percent. Zillow's real-time mortgage rates are based on thousands of custom mortgage quotes submitted daily to anonymous borrowers on the Zillow Mortgages site and reflect the most recent changes in the market. 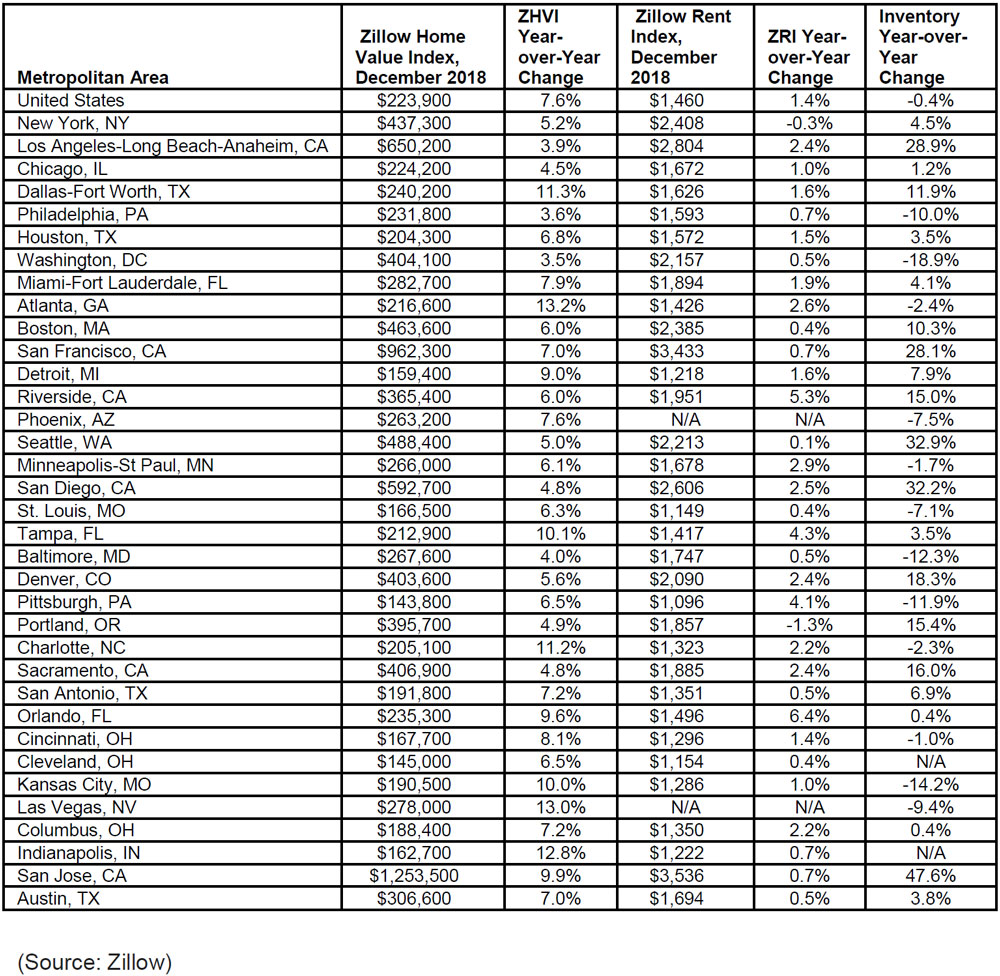