Residential Rents Accelerating in US, Fastest Pace in 21 Months


According to the February 2018 Zillow Real Estate Market Report, residential median rent across the nation is accelerating at its fastest pace in 21 months. Over the past year, the median rent in the U.S. rose 2.8 percent to a Zillow Rent Index (ZRI) of $1,445.

The fastest appreciating rental markets are along the West Coast in Sacramento, Calif., Riverside, Calif., and Seattle. This is the seventh month in a row that Sacramento has topped the list of markets with the fastest rental growth. Median rent in Sacramento rose more than 8 percent since last February to a ZRI of $1,849.


Minneapolis and Atlanta also are among the fastest-appreciating rental markets, both reporting about a 4.5 appreciation rate over the past year.

As for-sale inventory remains tight, home prices rise and higher mortgage rates erode affordability, more households may opt to rent rather than buy -- either by necessity or by choice -- driving up demand for rental homes.

"Rental appreciation slowed between 2015 and mid-2017, but is once again picking up steam, reaccelerating over the past nine months," said Zillow senior economist Aaron Terrazas. "For-sale inventory is tight, and with home prices continuing their rapid climb, it's becoming more and more difficult for renters to become owners, forcing them to rent longer than they otherwise would have. Searching for the 'right' home has become a drawn out affair and rising prices require more savings for a down payment. Were it not for strong new apartment construction over the past half-decade, rental appreciation would be even stronger than it is now."

Over the past nine months, national home value growth has fluctuated in the range of 7.2 percent to 7.6 percent annually. For the year ending in February 2018, home values rose 7.6 percent to a median of $210,200.

The end of February saw mortgage rates at their highest since April 3, 2014. Mortgage rates on Zillow increased throughout February, starting at 4.06 percent, the lowest rate of the month, and ending at 4.26 percent. The high was hit mid-month, at 4.28 percent. Zillow's real-time mortgage rates are based on thousands of custom mortgage quotes submitted daily to anonymous borrowers on the Zillow Mortgages site and reflect the most recent changes in the market. 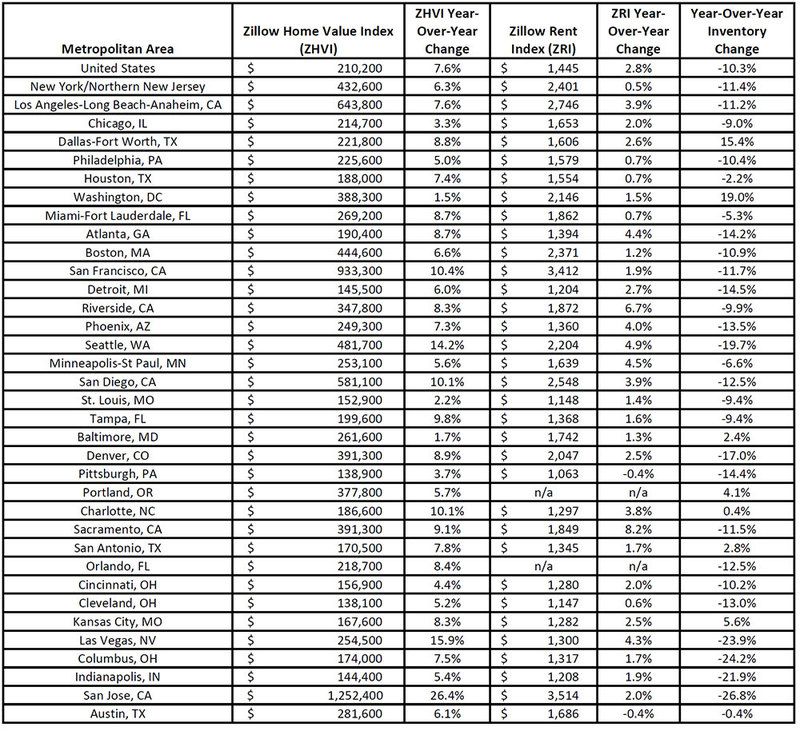