Share of All Cash Home Sales in U.S. Hits 8-Year High in October

All-cash purchases most prevalent in Florida

According to national property broker Redfin, roughly one-third (31.9%) of U.S. home purchases were paid for with all cash in October 2022. That's up from 29.9% a year earlier and the highest share since 2014.

The share of home purchases using all cash shot up in the beginning of 2021 after reaching a record low of 20.1% in April 2020 and has remained elevated. But the factors encouraging buyers to pay in cash are different in the current slow housing market than they were during the pandemic home buying frenzy.

"Today's affluent homebuyers are motivated to pay in cash because the surge in mortgage rates makes them want to avoid loans--and the high monthly interest payments that come with them--altogether. Mortgage rates have declined in recent weeks but are still hovering above 6%," said Redfin Economics Research Lead Chen Zhao. "During the pandemic housing boom, buyers were incentivized to pay in cash because of low rates, which drove up competition and made all-cash offers an effective bargaining chip for those who could afford them."

All-cash purchases were most common in Florida in October 2022. Jacksonville, where roughly half (49.7%) of homes were bought in cash in October, comes first, followed by West Palm Beach (48.6%). Next come a pair of Ohio metros: Cleveland and Cincinnati, which are also on the list of places where cash purchases rose most. They're followed by Atlanta, at 41.3%.

Expensive West Coast metros dominate the list of places with the lowest share of all cash-purchases. They're least common in the Bay Area: Just 14.3% of home purchases in San Jose and 16.5% in Oakland were made in cash. Next come Seattle (19%), Los Angeles (19.2%) and Newark, NJ (20%).

Roughly one in seven (14.6%) mortgaged home sales used an FHA loan, the highest share in nearly two years. That's up from 13.1% a year earlier and a record low of 10.4% in April. Overall, conventional loans are the most common type for homebuyers, making up 78.5% of all home sales that used a mortgage in October. That's down from 80.5% a year earlier but largely in line with where the share has stood since mid-2020.

FHA loans, which typically allow for lower down payments, have ticked up in popularity in response to the slowdown in housing-market competition. They were less common at the height of the pandemic buying boom, when sellers were receiving multiple offers and would often choose the one with strongest financing.

"I'm working with several FHA buyers," said Cleveland Redfin agent Jerry Quade. "They're back in the market after bowing out for the last two years, hoping to secure a relatively low-priced home with no competing offers and a high likelihood that the seller will accept their loan type."

The share of mortgaged sales using VA loans, which also have lower qualification thresholds for borrowers, rose to 6.9% in October, the highest share in over two years. That's up slightly from 6.4% a year earlier and up from the record low of 5.5% set in mid-2021. 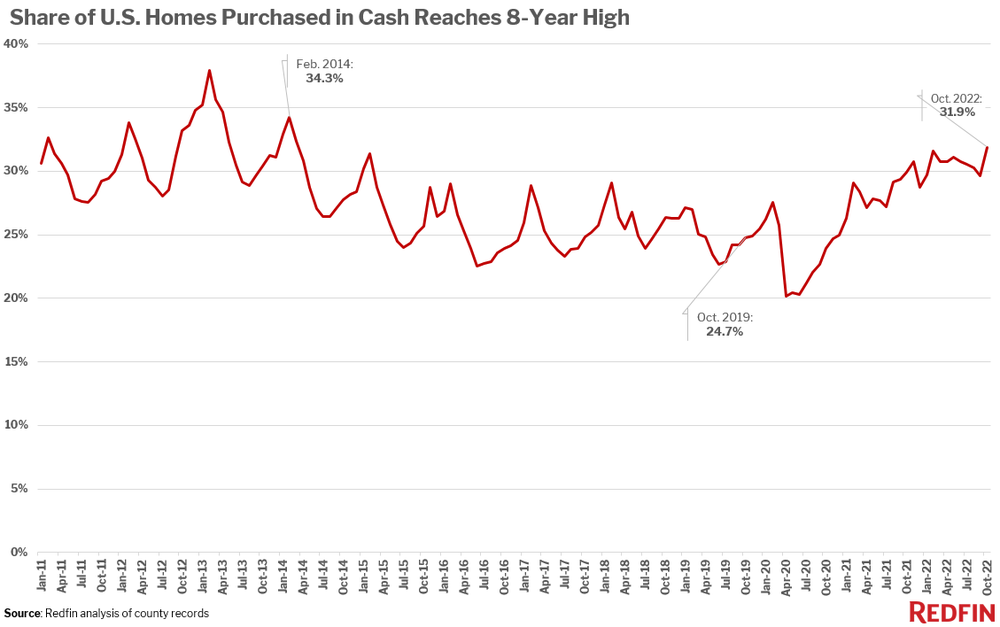 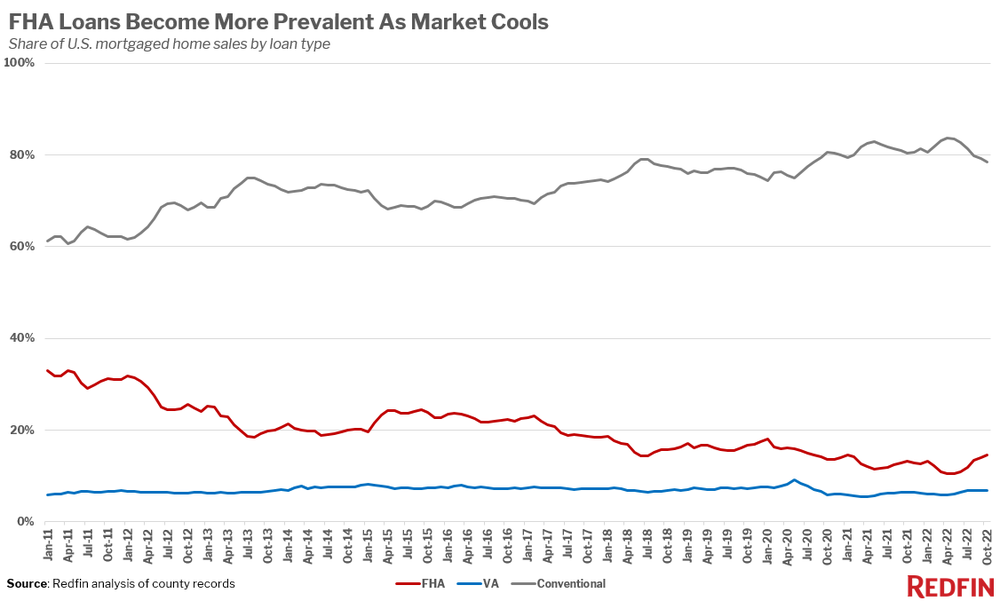