Zillow is reporting this week that massive skyrocketing unemployment across the U.S. has prompted millions of adults to move back in with their parents.

Zillow is further reporting that the potential rent lost from Gen Z alone could total an estimated $726 million, and the ripple effects of their next move could have far-reaching consequences for the housing market.

The number of adults living in a parent's or grandparent's home grew by more than 2.7 million in March and April, nearly triple the next-largest two-month increase from the past five years. A large majority of those who moved home -- about 2.2 million -- are from Generation Z, and between 18 and 25 years old.

Those 2.2 million Gen Zers represent an estimated $726 million in rent payments each month -- payments that could be lost if these moves prove to be more than a temporary measure. That represents about 1.4% of the rental market at risk. It is highly unlikely that all leases will be broken and this full amount would go unpaid, but it serves as a gauge of the potential impact on housing.

The next move this population makes could shape the housing market's near future. If jobs quickly return to pre-pandemic levels, the housing status quo could return just as quickly as these renters return to the market. But if jobs are permanently lost or slower to recover than expected, that could free up many rental units and drive down prices.

"The share of adults living with their parents has been high since the global financial crisis of the aughts," said Zillow Senior Principal Economist Skylar Olsen. "Then, it was Millennials flocking to the basements and spare bedrooms of their Baby Boomer parents, where many remained as rent burdens grew. Now, it's Gen Z's turn to ride out today's crisis amid massive unemployment. But this time, rents are more likely to slow, easing the path to returning to living on their own even if some under-employment persists. Apartment construction has exceeded historic norms in recent years and some are likely to double up or live more affordably in all kinds of ways, which should soften rent growth, at least for now."

Previous Zillow research has shown renters in some industries highly affected by coronavirus-related layoffs were struggling to keep their heads above water even before the pandemic began. It's possible that many will appreciate the breathing room afforded by living with parents if allowed to stay rent-free, and stay even after their jobs return. That could allow some Gen Zers to save enough to move into homeownership more quickly, or perhaps even delay their parents from downsizing into a smaller home while a child is still living under their roof.

Young Americans move more often in general because they tend to have less stable employment and have not had time to accrue the same level of savings as older counterparts. Many also move home during the summer due to college schedules, typically bumping up the share of young adults living with parents by 2-3 percentage points from April to July.

It is likely that some college students made that move earlier this year as campuses closed due to COVID-19, contributing to the jump seen in April, but there were far more young people living with parents in April than even during a typical summer peak, indicating the usual seasonal shift was super-charged by soaring unemployment. Recently unemployed young people moved back home at roughly the same rate as usual -- about 60% of them typically live with parents -- but the pool is much bigger than ever.

Metros with a higher share of young renters have a greater potential for impact. This includes Austin, Kansas City, Cincinnati and Pittsburgh. On the other end are areas with more millennials and older renters, including Miami, New York and Los Angeles, each with less than 1% of the rental market made up of young people who have moved home. 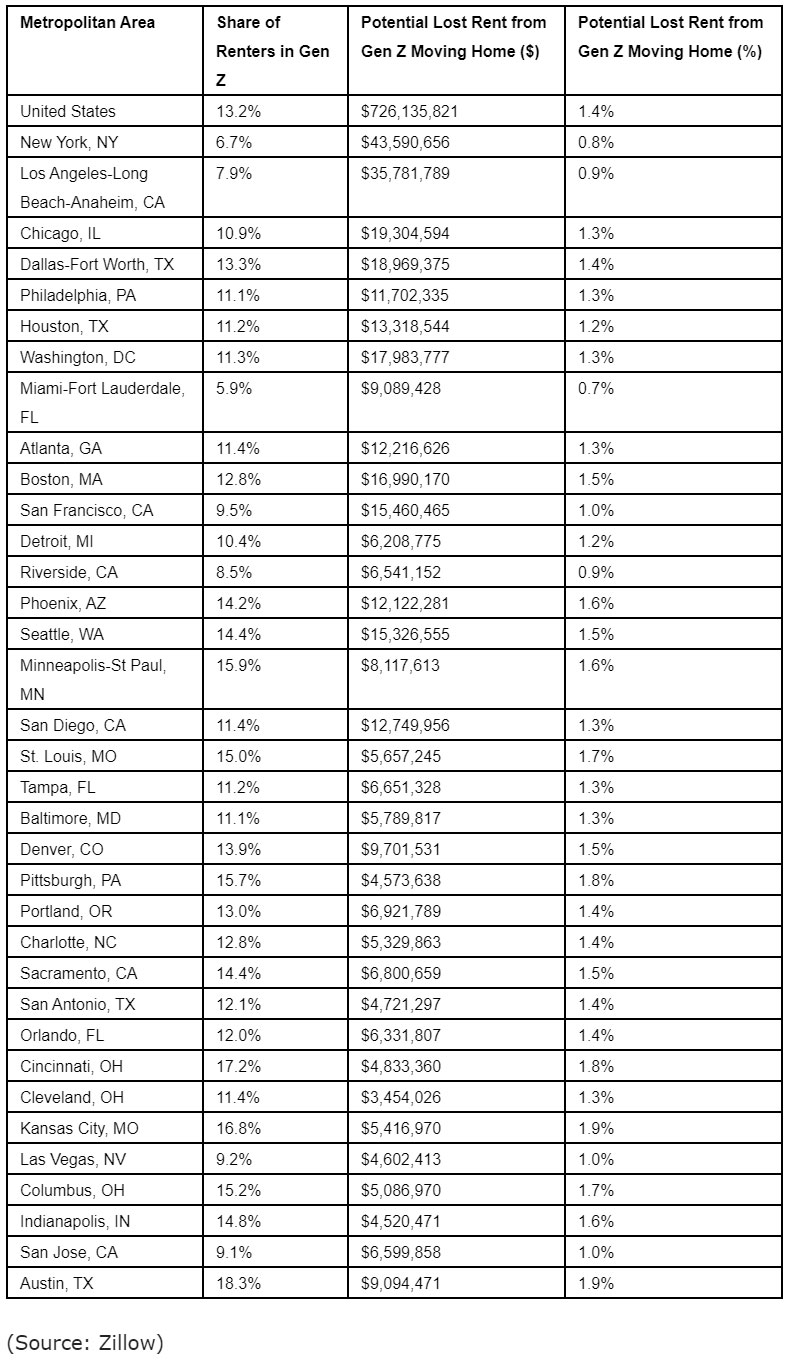