According to national property broker Redfin, U.S. homes sold at their fastest pace and for more above list price in March 2022 than any other March on record.

Seasonally adjusted home sales fell 4% as soaring mortgage rates and prices sidelined more buyers, whose options were severely limited due to a decline in homes being listed.

"Although pricey coastal markets began showing early signs of a slowdown in late March, nationwide sales data for the full month reflects the hottest March market on record, since homes that sold last month mostly went under contract in February," said Redfin chief economist Daryl Fairweather. "We expect the combination of surging mortgage rates and record-high home prices to cause more homebuyers to drop out of the market. Unfortunately, homeowners are turning their back on the market too. Instead of being motivated to list before prices weaken, potential home sellers may be choosing to wait-out the impending market cooldown."

Median sale prices increased from a year earlier in all of the 88 largest metro areas Redfin tracks. The largest price increases were in Tampa, FL (+29%), Phoenix, AZ (+27%) and McAllen, TX (+27%).

Seasonally adjusted active listings--the count of all homes that were for sale at any time during the month--fell 13% year over year to an all-time low in March.

82 of the 88 largest metros tracked by Redfin posted year-over-year decreases in the number of seasonally adjusted active listings of homes for sale. The biggest year-over-year declines in active housing supply in March were in Allentown, PA (-47%), Greensboro, NC (-41%) and Fort Lauderdale, FL (-37%). The only metro areas where the number of homes for sale increased were Elgin, IL (+29%), Chicago, IL (+13%), Detroit, MI (+13%) and Lake County, IL (+5%).

Fifty-four percent of homes sold above list price, up 12 percentage points from a year earlier, and the highest March level on record. The average sale-to-list price ratio in March was 102.4%, up from 100.6% a year earlier, another record-high for this time of year. 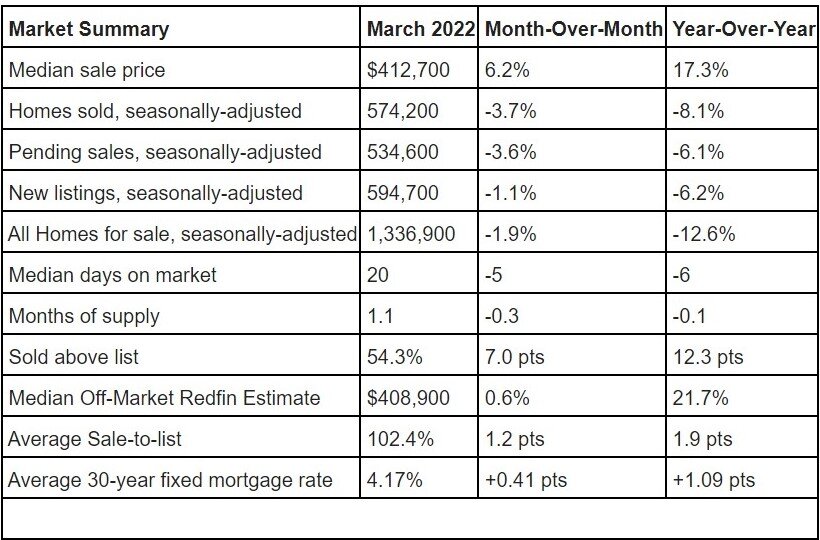