National property broker Redfin is reporting this week that fewer U.S. homes were for sale in December 2022, driving seasonally-adjusted home sales down 3.6%. This marks the largest month-over-month sales decline since May 2020. Home prices surged 15% from a year earlier, the 17th consecutive month of double-digit increases.

"Home sales are slumping, but not for lack of demand," said Redfin Chief Economist Daryl Fairweather. "There are plenty of homebuyers on the hunt, but there is just nothing for sale. In many markets, shopping for a home feels like going to the grocery store only to find the shelves bare. In January, I expect to see more buyers and sellers in the market, but demand will increase more than supply -- pushing prices higher at the start of this year." 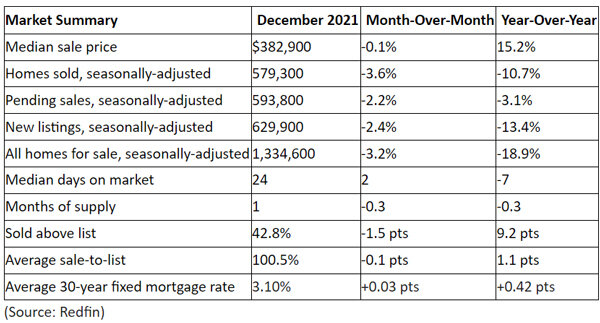 "The wild housing market did not take a break for the holidays," said Brionna Chang, a Redfin real estate agent in the San Francisco area. "There was one two-bedroom home in Orinda that was listed just before Christmas and around 40 people immediately came to the open houses. It ended up getting multiple offers and going for $325,000 over the $1.2 million asking price."

Median sale prices increased from a year earlier in all but one of the 88 largest metro areas Redfin tracks. The only metro area with a decrease was Bridgeport, CT, where home prices fell 0.4% from a year earlier following a 28% year-over-year increase in December 2020. The largest price increases were in Austin, TX (+30%), North Port, FL (+28%) and Phoenix, AZ (+28%).

Only one of the 88 largest metros tracked by Redfin posted a year-over-year increase in the number of seasonally adjusted active listings of homes for sale: Detroit, MI (+4%). The biggest year-over-year declines in active housing supply in December were in Baton Rouge, LA (-52%), San Jose, CA (-49%) and San Francisco, CA (-46%).

Seasonally adjusted new listings of homes for sale were down 13% in December from a year earlier, the largest decline since May 2020. New listings fell from a year ago in 82 of the 88 largest metro areas.

The typical home that sold in December went under contract in 24 days--a week faster than a year earlier, when homes sold in a median 31 days, but up nine days from the record low of 15 days in June. 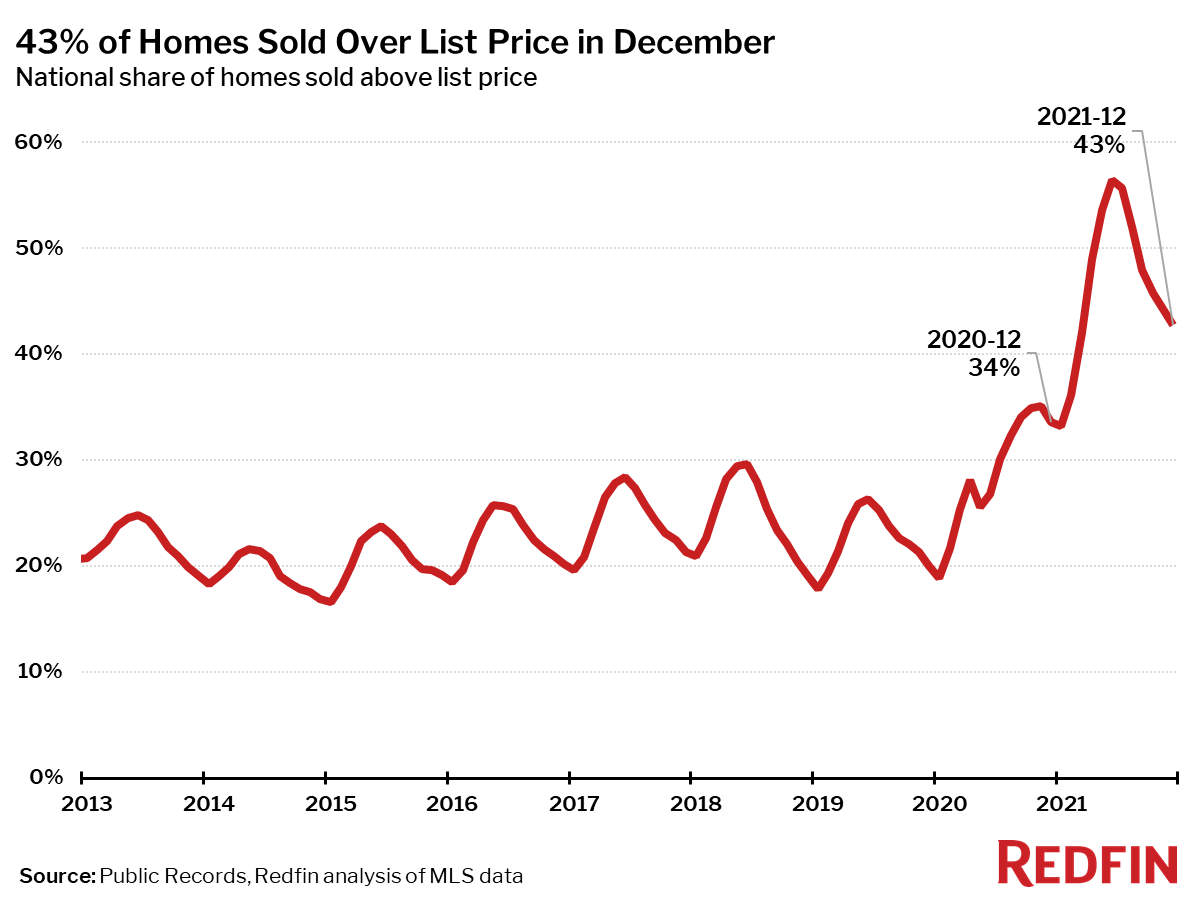 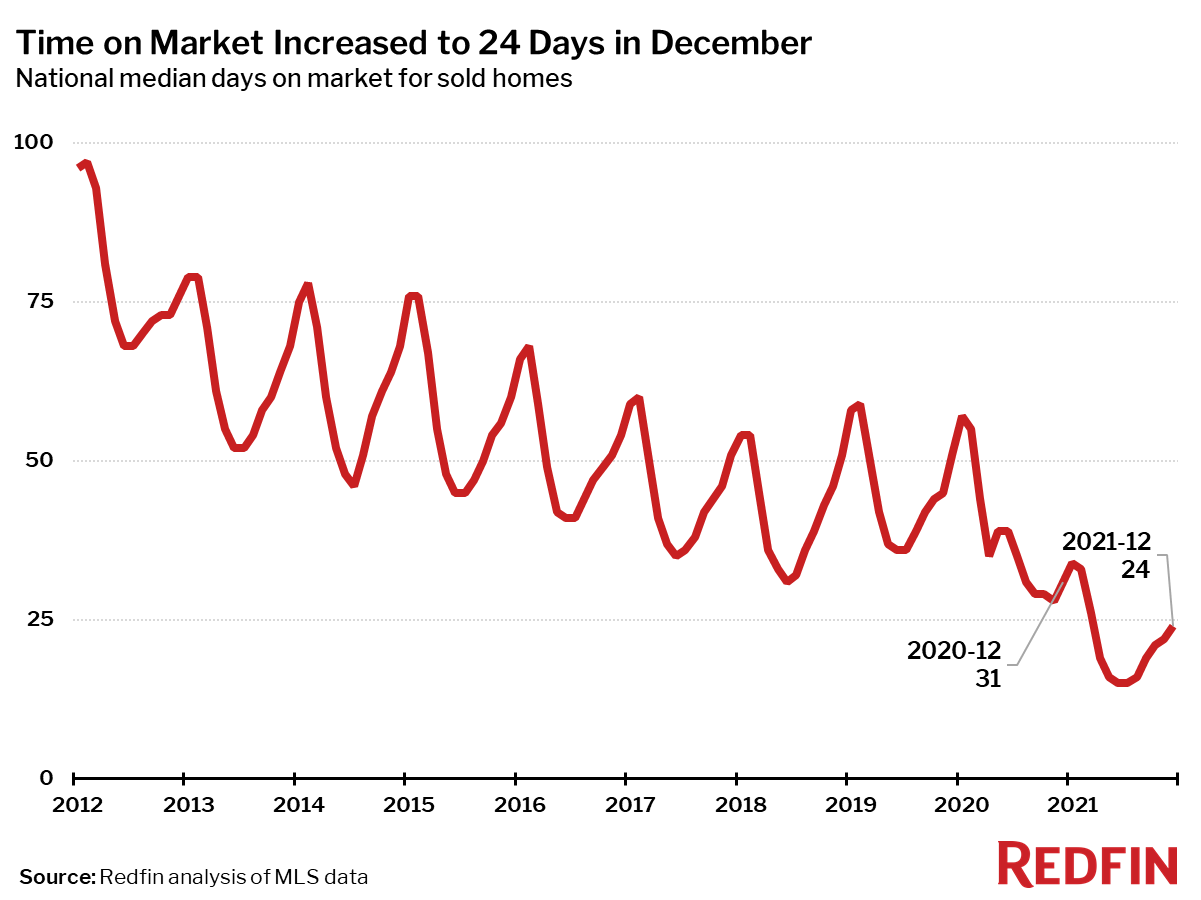 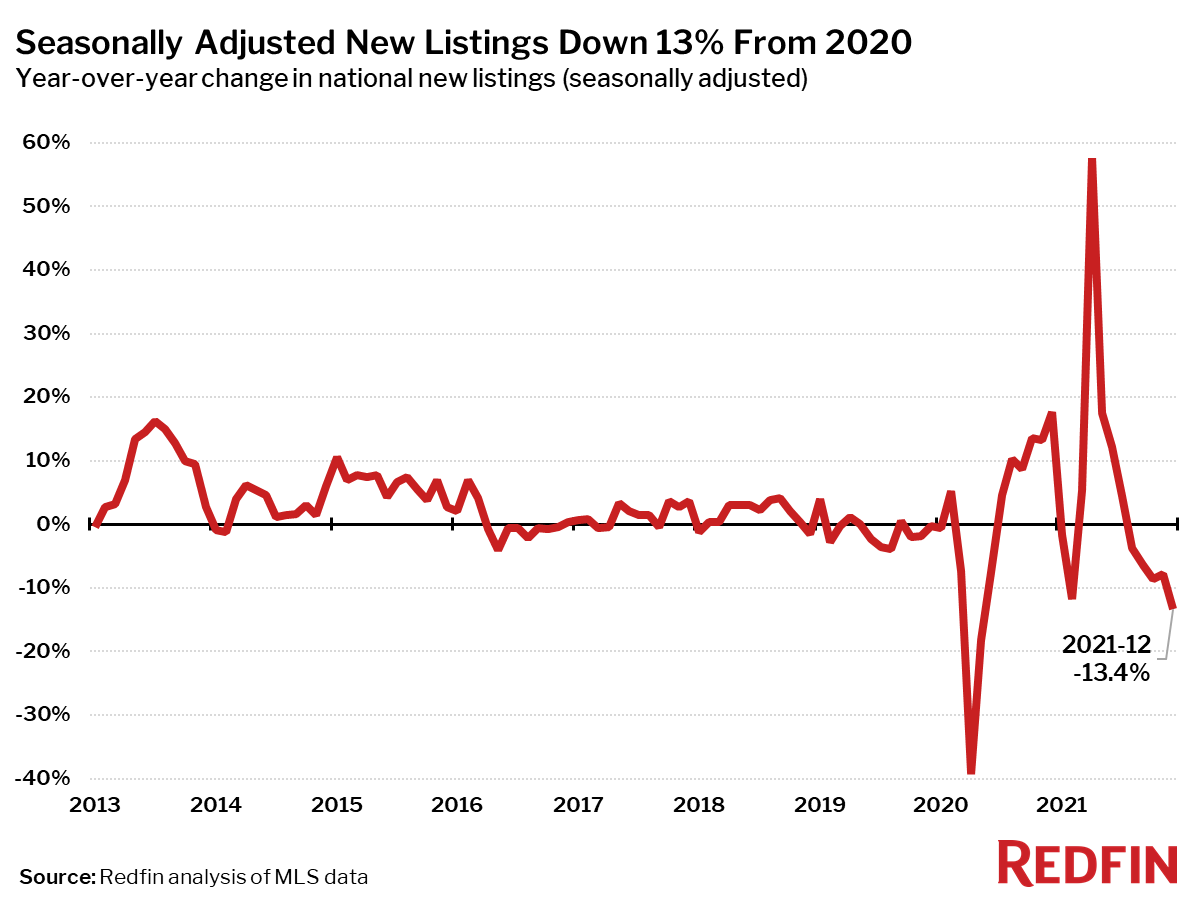 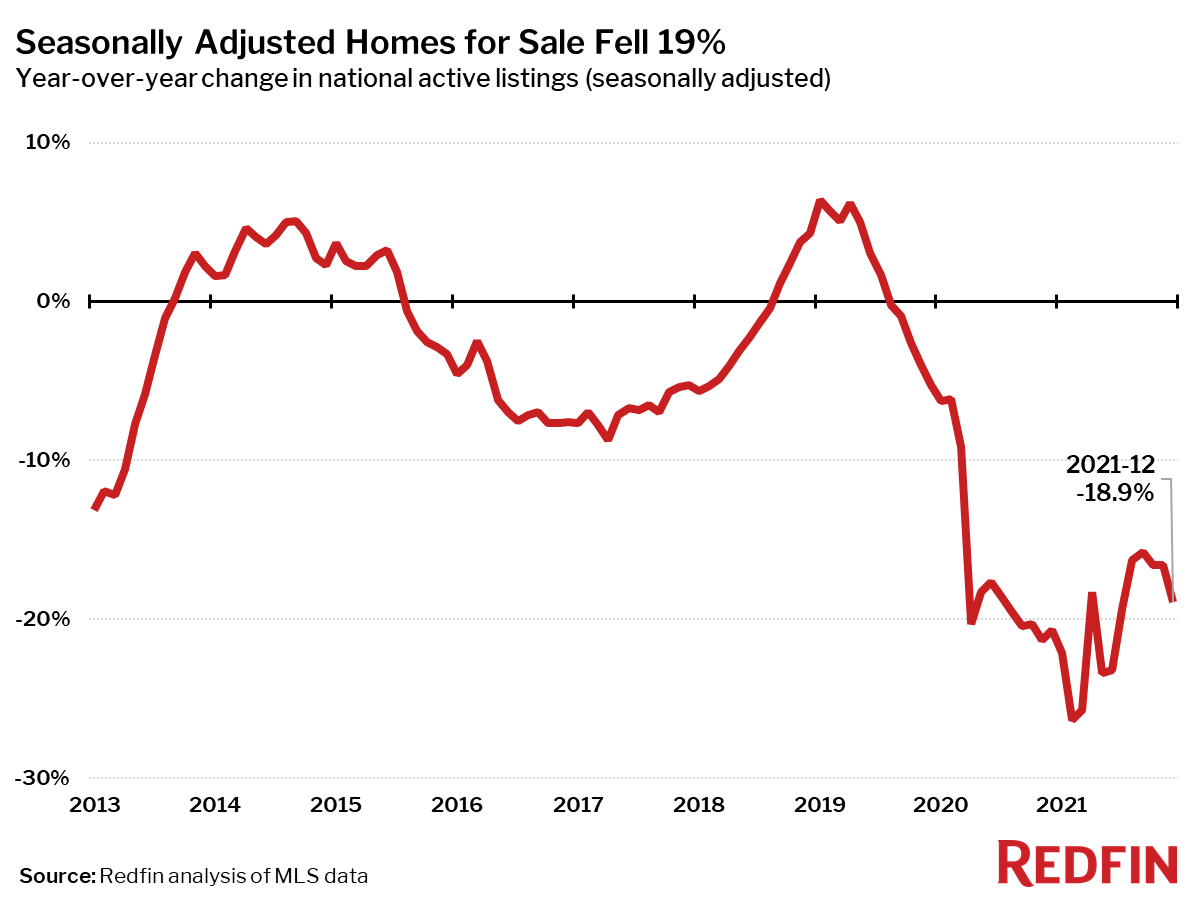 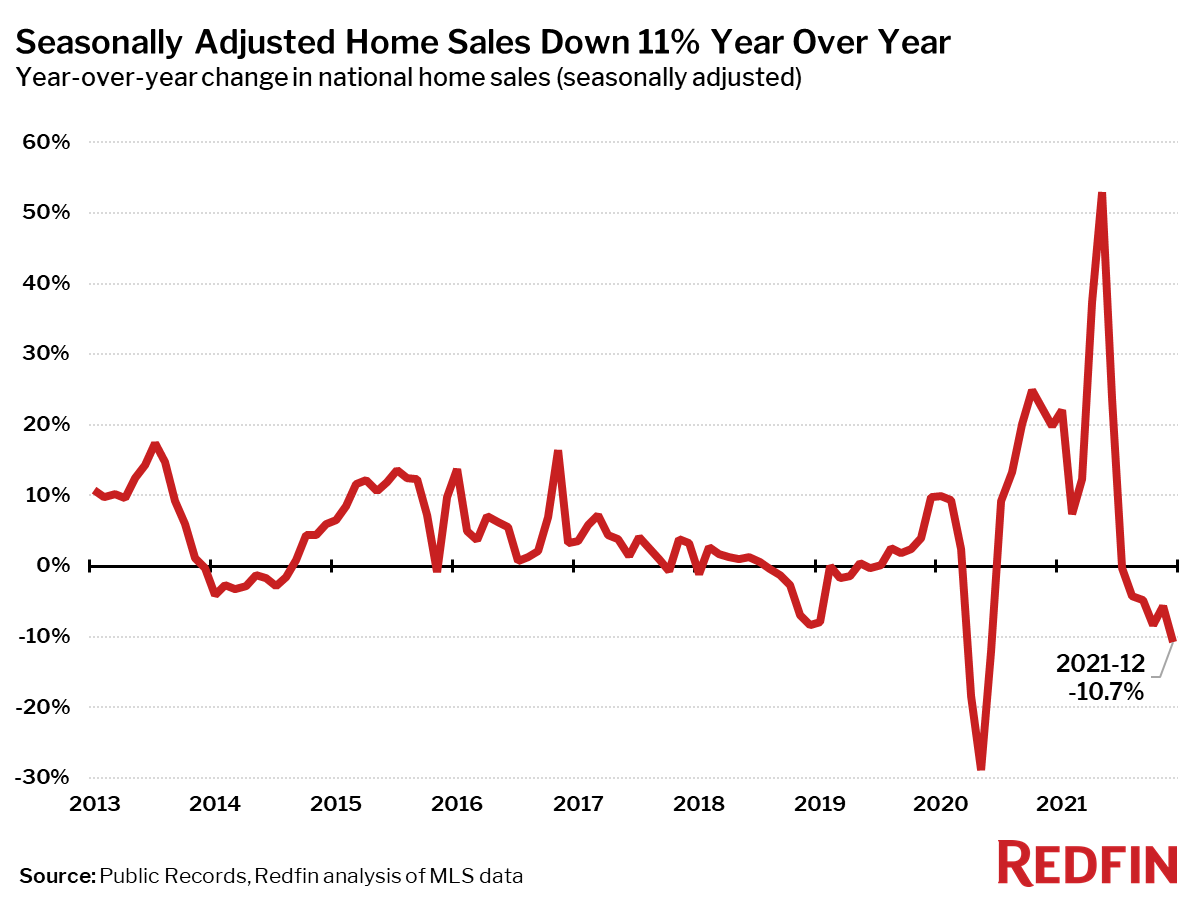 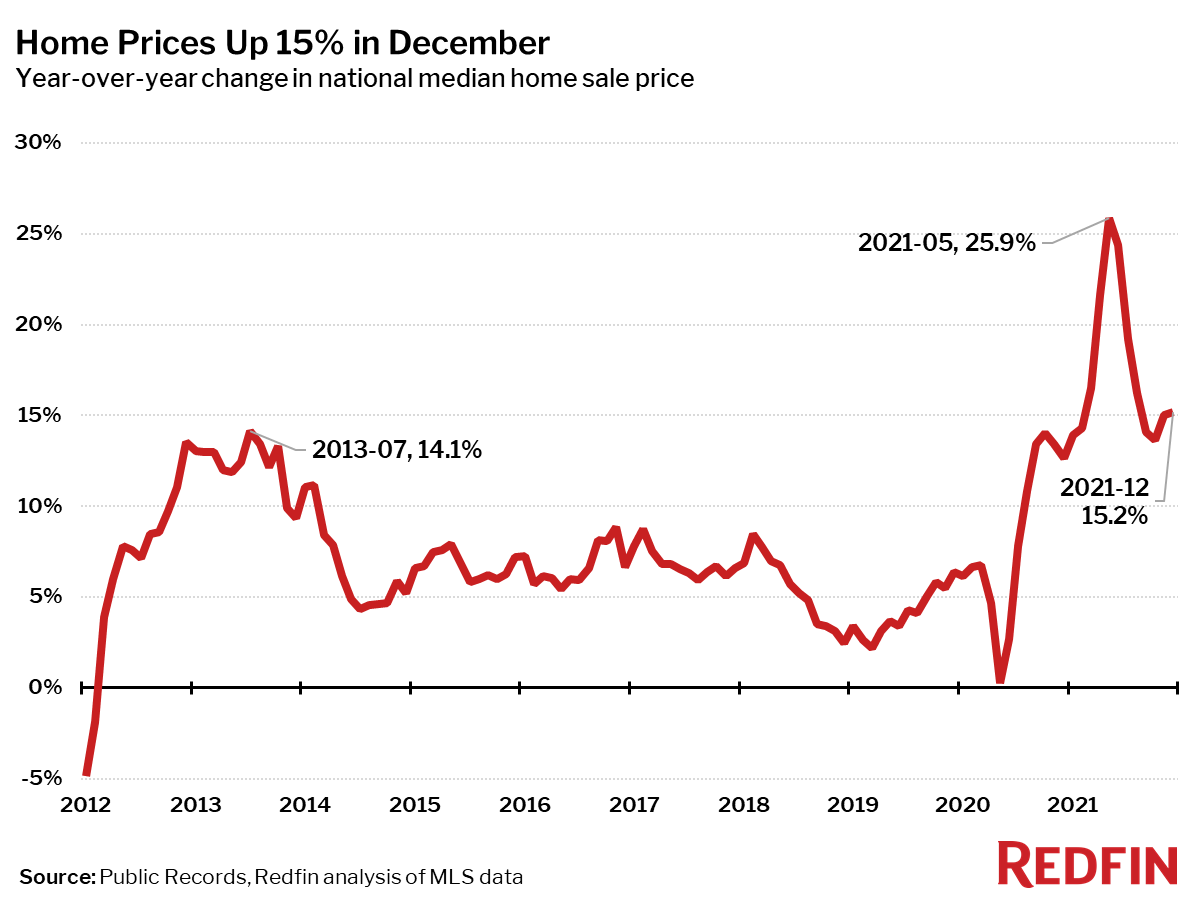