Homebuyer Competition in U.S. Drops for First Time in 6 Months

According to national property broker Redfin, 65 percent of home offers written by Redfin agents faced competition on a seasonally adjusted basis in March 2022.

That is down from a revised rate of 66.7% in February 2022, marking the first month-over-month decline since September 2021 -- a sign that demand is starting to cool as soaring mortgage rates and housing prices prompt some buyers to back out of the market.

Still, bidding wars remained more common than they were a year earlier, when 62.2% of offers encountered competition. On an unadjusted basis, March's bidding-war rate was 69.3%, down from 71.9% in February.

"Most homebuyers are still encountering bidding wars, but competition is beginning to cool because surging mortgage rates and home prices are prompting some Americans to back out or put their buying plans on hold," said Redfin Chief Economist Daryl Fairweather. "We expect bidding wars to ease further in the coming months as rising mortgage rates price more buyers out of the market. That should provide some relief for people who can still afford to buy, as they'll likely face fewer competing offers and may no longer need to offer drastically over the asking price in order to win. Unfortunately, the slowdown in competition won't help those who have already been priced out of homeownership and are now grappling with soaring rental costs."

The drop in homebuyer competition is one sign that the housing market is starting to slow down. Mortgage applications, home tours and online housing searches are also declining, and more sellers are lowering their asking prices after putting their homes up for sale.

San Jose and Boston Have the Most Competitive Housing Markets

San Jose, CA had the highest bidding-war rate of the 36 U.S. metropolitan areas in this analysis, with 79.8% of offers written by Redfin agents facing competition in March. Next came Boston at 79% and Providence, RI at 78.3%. Worcester, MA and San Diego rounded out the top five, with bidding-war rates of 78.2% and 78.1%, respectively.

While pricey coastal markets have relatively high rates of competition, there are signs that homebuyer demand in these areas is starting to ease. Fewer buyers have requested service from Redfin agents in San Francisco, Los Angeles, Washington, D.C., Boston, and Seattle at the beginning of this year compared to the same time last year. Meanwhile, the number of buyers requesting our agents' services nationwide has increased by double digits.

Bidding wars in San Francisco had an average of 7.8 offers in March, down from 10 in March 2021--another sign that homebuyer demand is starting to cool.

"March was the first month in two years that I had a weekend with zero house tours. People are getting priced out," said Maria Giron, a Redfin real estate agent in the Bay Area. "Some buyers are in shock and dropping out altogether. Others are looking at more affordable options like smaller homes or neighborhoods that are farther out. The buyers I'm working with who are most sensitive to the rise in mortgage rates are first-time buyers looking for homes in the $500,000 to $700,000 range."

Giron continued: "Homes are still getting multiple offers, especially in desirable areas, but those in other areas are now seeing fewer offers than they were a couple of months ago."

Townhouses Are Most Likely to See Bidding Wars

Nearly three-quarters (72.4%) of Redfin offers for townhouses faced competition in March--a higher share than any other property type. Next came single-family homes, with a bidding-war rate of 70.2%, followed by multi-family properties at 68.1% and condos/co-ops at 62.6%.

Many homebuyers have sought out townhouses because they've been priced out of the market for single-family homes. The typical home that went under contract in March was 1,720 square feet, down 1.8% from 1,751 square feet a year earlier, a recent Redfin analysis found. 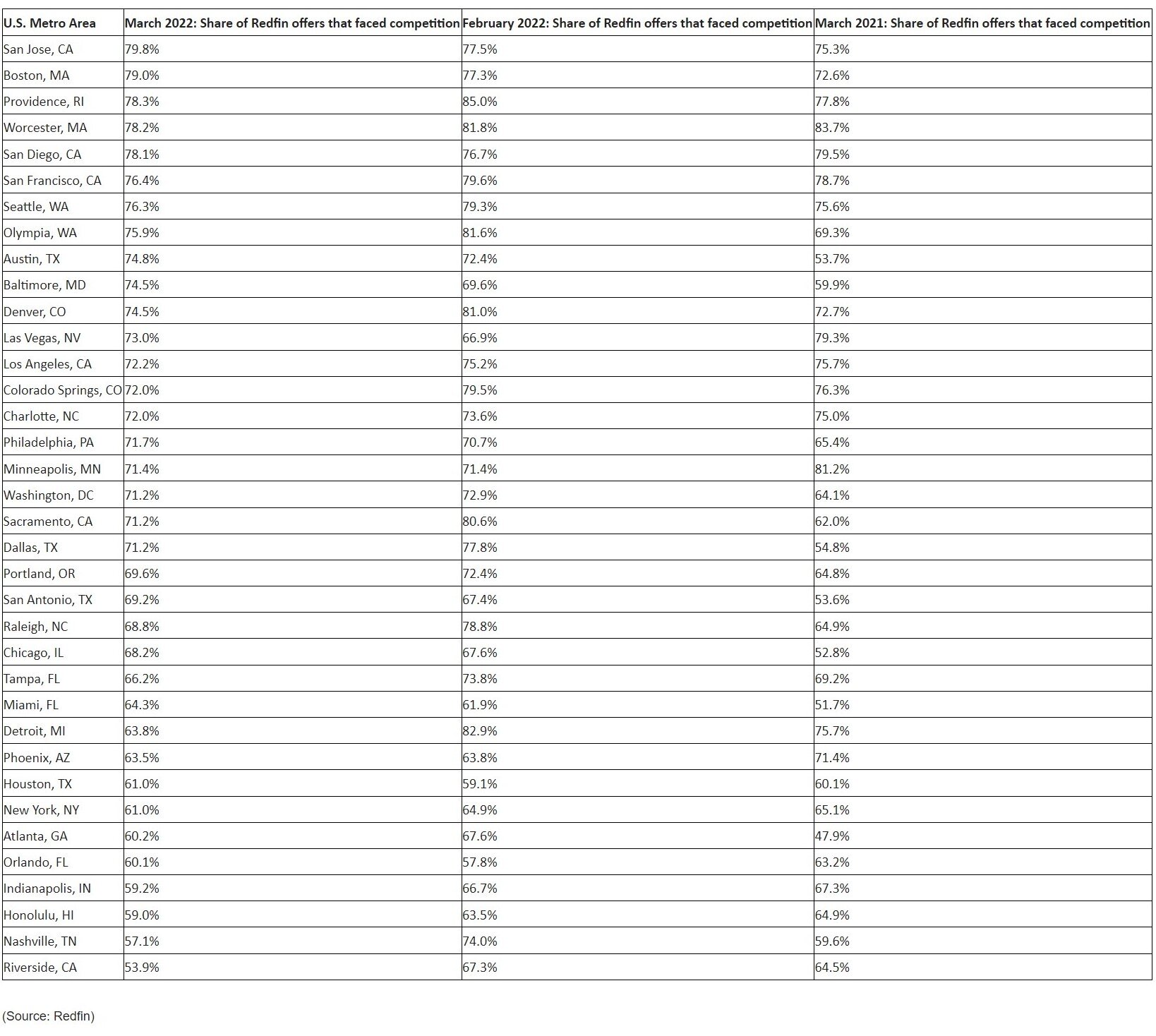