Where COVID-19 Has Not Peaked, U.S. Housing Markets Show Signs of Recovery

Property broker Redfin is reporting this week that new listings and home sales are seeing early signs of recovery in the U.S. housing market, even as some cities struggle to flatten the coronavirus curve.

It found that in areas where real estate has been deemed an essential service, both housing supply and demand is beginning to strengthen, even if the community has not yet experienced a peak in COVID-19 cases.

A Tale of Four Metros

Redfin examined delistings, new listings and home sales in Chicago, where COVID-19 continues to trend upward; Seattle and New Orleans, which have flattened the curve; and Detroit, which has also flattened the curve but did not deem real estate essential.

"While consumers are still hurting from this pandemic, we're starting to see early signs of recovery," Redfin lead economist Taylor Marr said. "Supply and demand have begun to strengthen, even in places where COVID-19 is still on the rise, as homebuyers and sellers start to see a light at the end of the tunnel. This has allowed prices to remain stable."

A Rollercoaster of Homes Taken Off Market

A surge in home delistings was one of the first signs that the housing market was experiencing a coronavirus-driven downturn. Nationally, delistings hit a record during the 28-day period ending April 9, when nearly 75,000 homes (1 of every 13 houses for sale) were pulled off the market. That compares with just 47,000 during the same period in 2019. Delistings have since slowed in most markets, but are still far more common than they were at this time last year.

In Chicago last month it appeared that the share of homes being delisted was starting to decline, however it has since bounced back and surpassed its prior peak. More than 2,600 homes, or 8.5% of active listings, were removed from the market during the 28-day period ending May 1. That's up from less than 8% a month prior.

Meanwhile, delistings in both New Orleans and Seattle peaked at around 6% of active listings in mid-April, and have since retreated to around 5%.

Home Listings Tank--Then Trickle Back in Most Markets

Nationally, new listings bottomed the week ending April 14 at about 48,000 homes--half the amount during the same period last year. They've since started to rebound in most markets, climbing to around 62,000 homes nationally during the week ending May 1, 2020.

In Seattle, new listings began to crash due to the coronavirus toward the end of March, when the stay-at-home order began and daily new COVID-19 cases hit an all-time high. They bottomed at the start of April, down 52% from the same period the prior year, and have since pared some losses, now only down around 42%. New listings in New Orleans reacted similarly, but took slightly longer to rebound, not staging a comeback until mid-April.

Detroit saw the biggest collapse in new listings, sinking as much as 79% from the prior year during the week ending April 2. Unlike the other metros in our analysis, new listings in Detroit have yet to rebound significantly, still down 70%, as real estate remains a non-essential service. New listings in Chicago are now only down 43% following a plunge of as much as 61% in April, despite continued growth in new daily COVID-19 cases.

As supply collapsed in April, so did demand--although it has seen a relatively quick comeback in some markets. The number of homes under contract to be sold plummeted nationally by 43% to about 32,000 during the week ending April 16, as buyers backed away from the market amid skyrocketing unemployment. Sales have since started to recover.

New Orleans has experienced the sharpest rebound, mirroring its encounter with COVID-19. With new coronavirus cases lower than any of the other three metros, pending sales in New Orleans are now up 2% year-over-year. That follows a record 54% plunge during the first week of April--the same week the metro saw COVID-19 cases peak. The Seattle metro has also seen a stark comeback, with pending sales now down just 21% following a 55% decline in early April.

Despite the continued rise in COVID-19 cases, demand in Chicago has also shown resilience--albeit not as much as in Seattle or New Orleans. Pending sales are now down just 37%, an improvement from the 58% decline in April.

Of the four metros in our analysis, Detroit has seen the weakest rebound, with homes under contract now down 70% after bottoming at about 80%. Still, people are buying move-in ready houses at lower price points, according to local agent Tony Orlando.

"Homes going for $250,000 and under are still super competitive," Orlando said. "One of my clients toured a $215,000 house in Pontiac, MI on a group Zoom call with several other prospective buyers the day it hit the market. Within 30 minutes, there were four offers. The property went for above-asking during a pandemic." 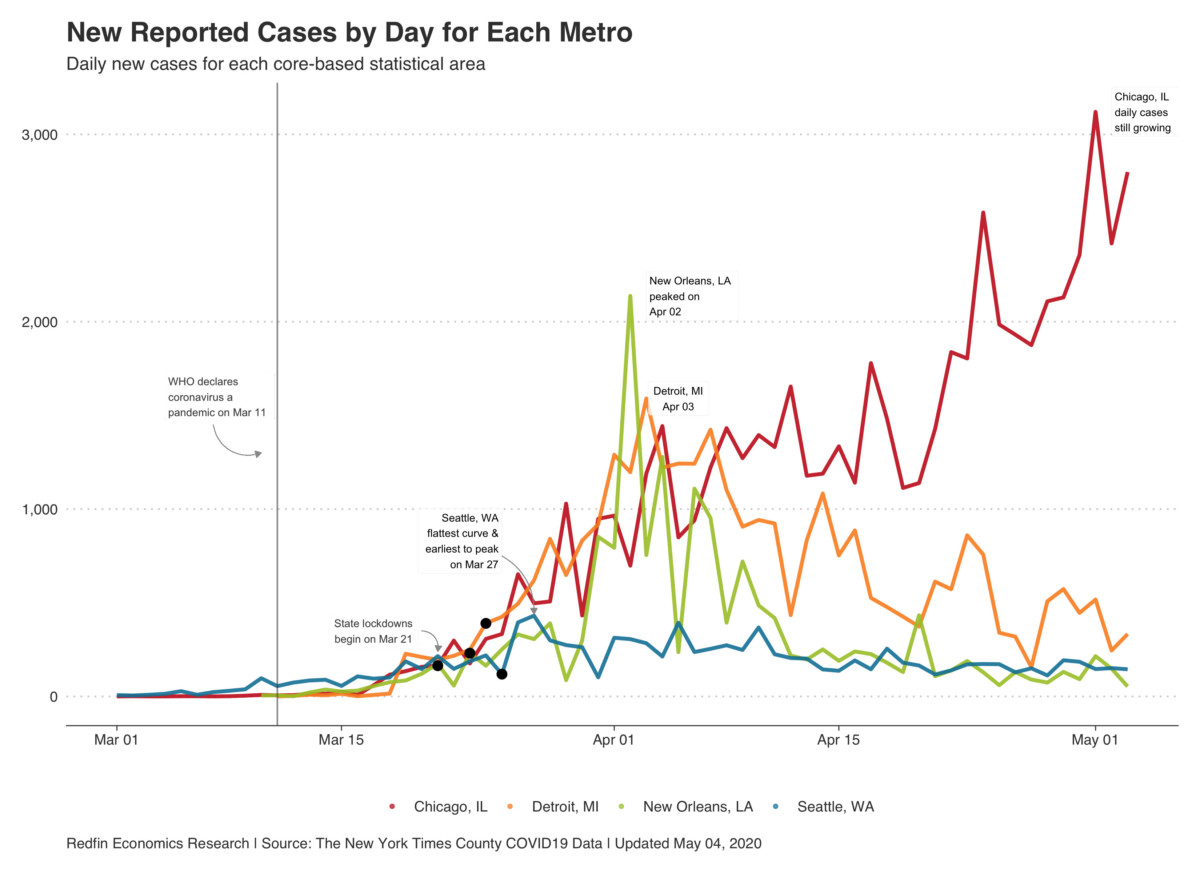 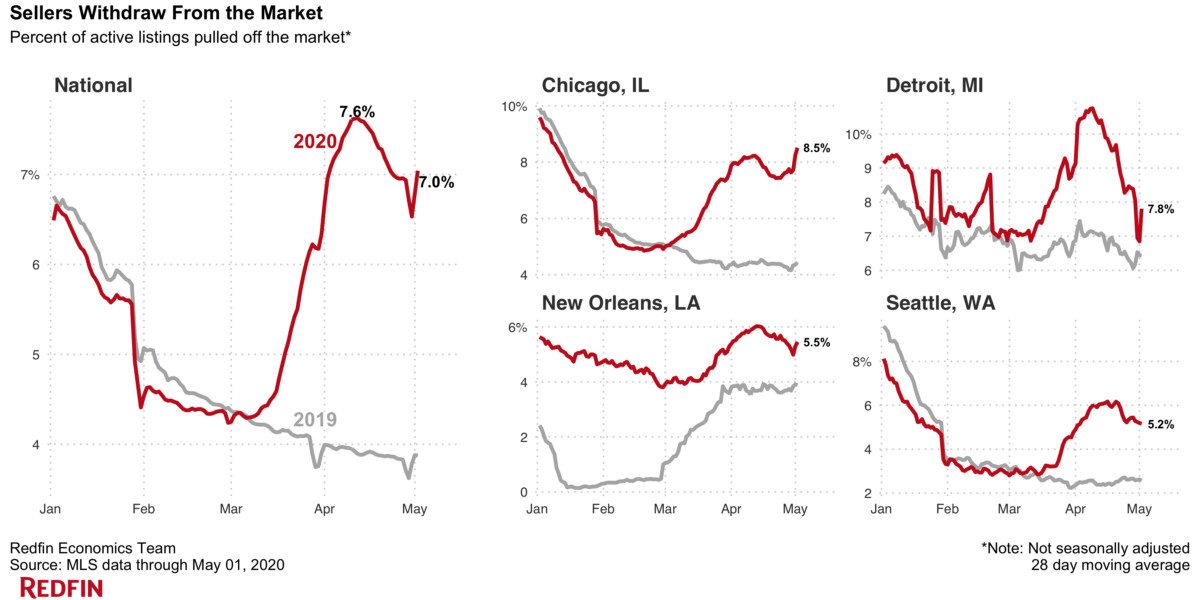 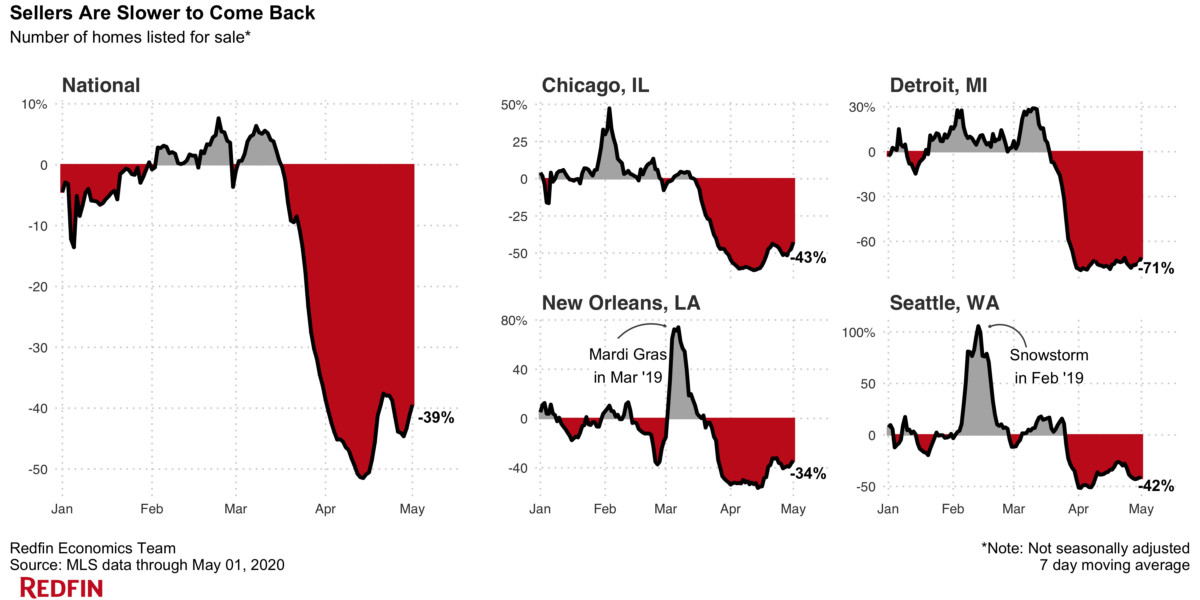 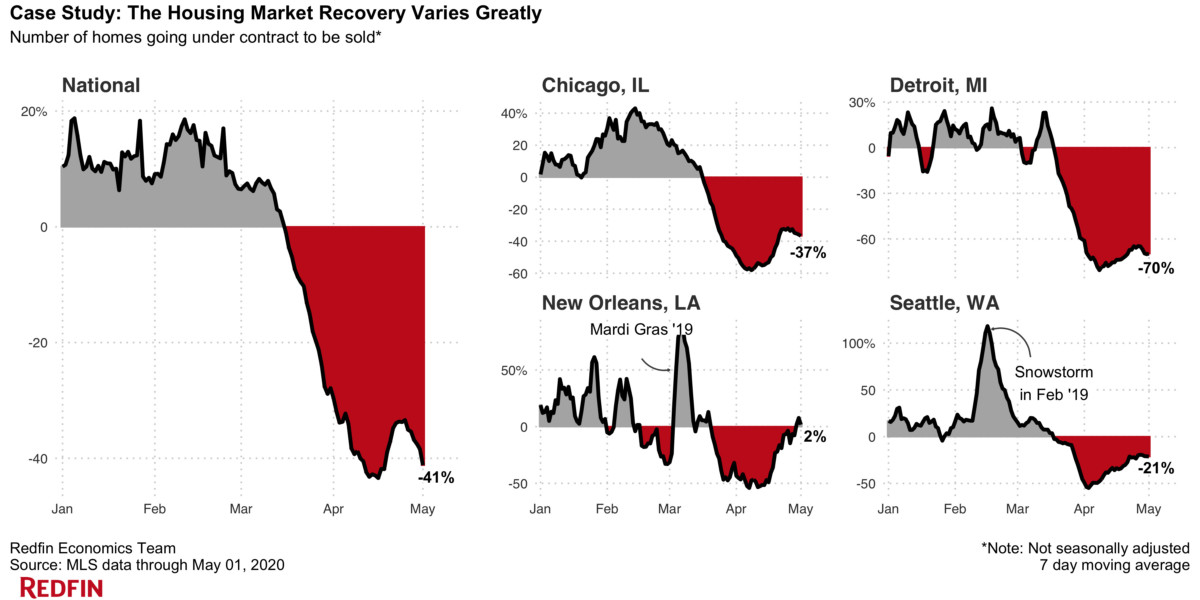