1 in 4 First-Time Homebuyers Used Covid Stimulus Money For Down Payments in U.S.

National property broker Redfin is reporting that nearly one-quarter (24%) of first-time homebuyers are using stimulus money for their down payment in the U.S. Stimulus money is the second-most common way of accumulating money for a down payment, after saving directly from paychecks.

The report is based on a Redfin-commissioned survey of 1,500 U.S. residents planning to buy or sell a home in the next 12 months. The survey was fielded by research technology company Lucid from Dec. 10 to 13, 2021. The report focuses on the 215 of those 1,500 respondents who answered, "How did you accumulate the money you need for a down payment?" This was a question Redfin only posed to participants who said they were buying their first home in the next year.

"There was a fair amount of economic uncertainty at the beginning of the pandemic and many people initially lost their jobs due to widespread lockdowns. But plenty of Americans, particularly those who are in a position to buy a home, are now in a better financial position than before," said Redfin Chief Economist Daryl Fairweather. "Stimulus payments provided a lot of Americans not only with necessary relief, but extra money in their pockets. Some people were also able to save more money than usual because they spent less on things like traveling, eating out and paying back student loans, which were paused during the pandemic."

The average American family with children received $6,660 in stimulus money in 2021 in the form of stimulus checks and the expanded child tax credit, both part of COVID-19 relief policies. While this survey identified a cohort of first-time homebuyers who say stimulus money contributed to their down payment, most stimulus recipients used the bulk of the money for everyday essentials.

Stimulus money can make a big dent in a down payment. The typical U.S. home sells for $382,900 and the median down payment is roughly 10% of the purchase price, which equals about $38,000 for the median-priced home. Some buyers put down as little as 3%, which would equal an $11,500 down payment.

Twenty-three percent of survey respondents said the ability to save extra money during the pandemic has helped with their down payment, the third-most common method of accumulating money for a down payment.

Other ways respondents reported collecting money for down payments include selling investments in cryptocurrency (12%) and cash gifts from family (12%). 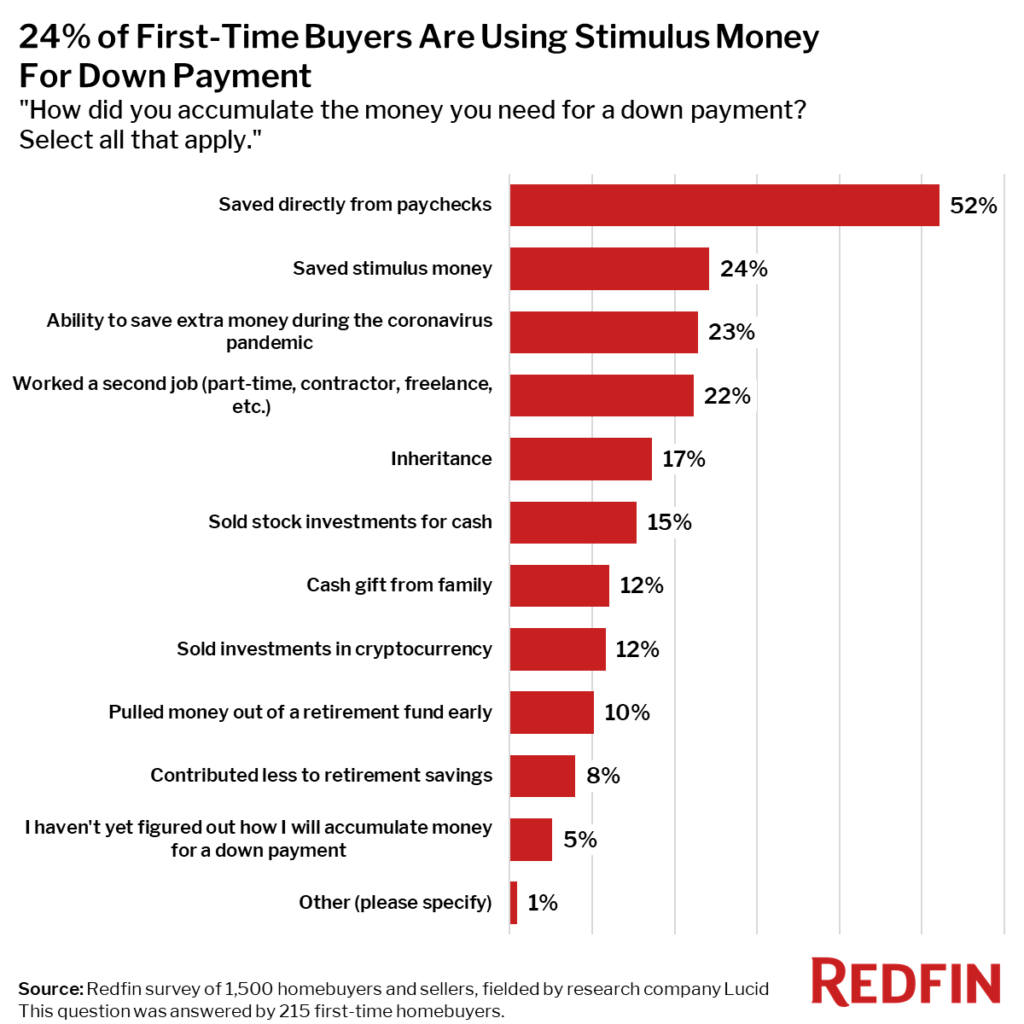