Residential News » Seattle Edition | By Michael Gerrity | January 30, 2019 8:15 AM ET
Signup for Our Weekly Newsletter »
According to new research by Zillow, U.S. homebuyers have long earned more than twice as much money, on average, as renters -- a gap that's remained relatively stable for more than a decade. But a new Zillow analysis shows buyers are beginning to distance themselves from other income groups, highlighting how expensive it is for first-time buyers especially to break into the housing market.

Not only is that a problem for renters trying to save for a down payment as home values continue to outpace incomes, but it also portends greater long-term impacts on wealth inequality.
From 2012 to 2017 home values rose 36 percent, while incomes climbed just 11 percent. The effect of that is there are now 3.5 million fewer households that can afford to buy the typical home, a Zillow analysis shows. The typical homebuyer household in 2017 earned more than 62.7 percent of all households, up from 59.8 percent in 2012.

Homebuyers and homeowners, who historically had similar incomes, are seeing a widening gap as buyers pulled ahead during the recovery from the Great Recession. That's largely because sales prices outpaced home values in many hot markets, meaning it takes more money to be a homebuyer than to be a homeowner.

Zillow says the breakdown of median household incomes in the U.S. now looks like this:
There are several reasons why renter households historically earn about half as much as buyers. Buying a home comes with large upfront expense, such as the down payment and closing costs. Higher-earning households are most likely to save up that down payment and buy, moving from the renter group to homebuyers. Renters also are more likely to be younger and single-income households.

Almost half of renters who moved in the past year (46 percent) considered buying a home instead during their search, but ultimately ended up renting. A third of renters (32 percent) say they will continue renting because they are saving for a down payment, according to the latest Zillow Group Consumer Housing Trends Report. Adding to the difficulty of saving is the continual climb of home prices, especially in the most-affordable segment of the market. More than two-thirds of buyers use at least some savings for their down payment, and nearly a quarter of buyers put down five percent or less.

"Home prices have outpaced incomes for nearly a decade, pushing homeownership further and further out of reach for first-time buyers even as homeownership aspirations remain very high," said Zillow senior economist Aaron Terrazas. "In the past, low interest rates, lax lending, and migration from pricier to more affordable communities have helped square that circle - but those palliatives break down sooner or later. If becoming a homeowner trends further toward the exclusive domain of society's most fortunate, wealth inequality could see an acceleration in the years ahead." 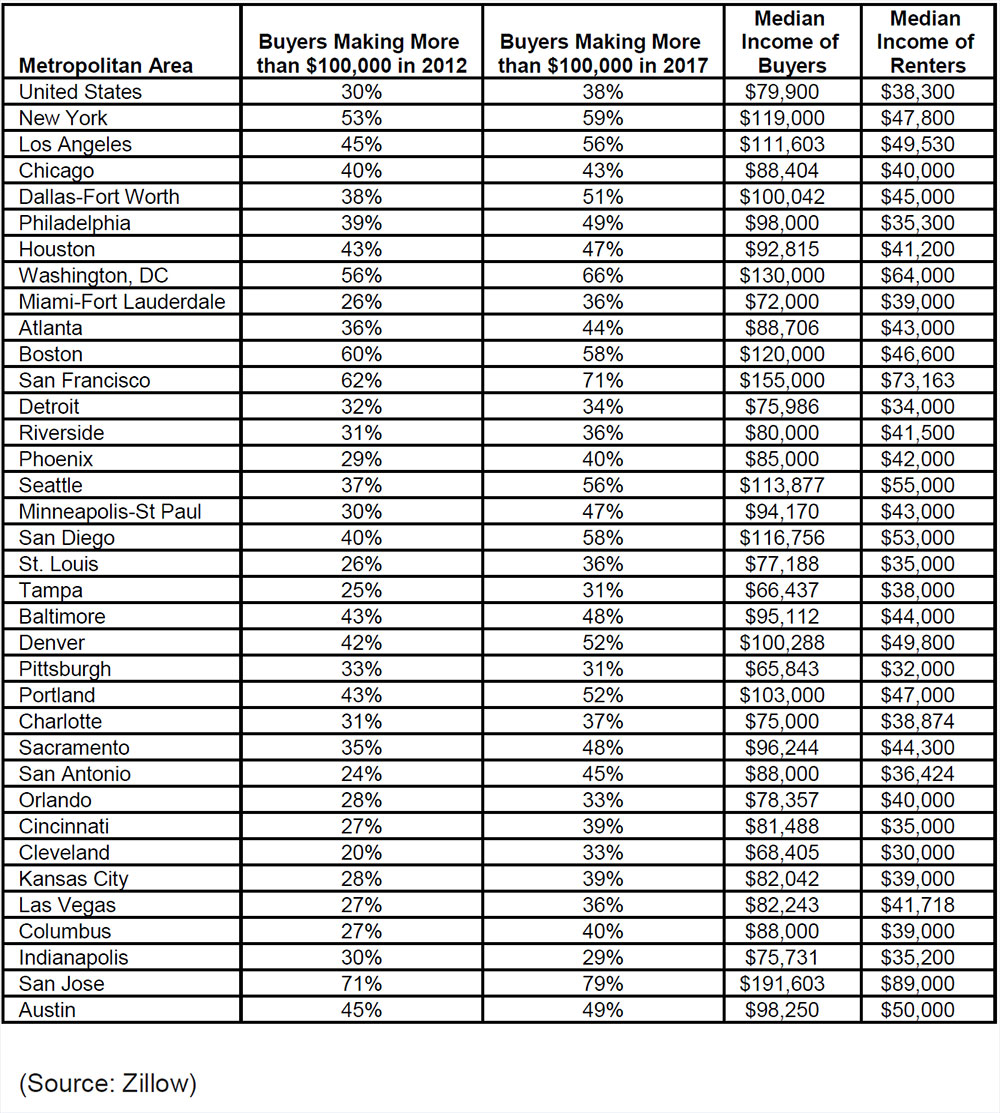