Auction of Nicolas Cage's Foreclosed Bel-Air Mansion is a Flop 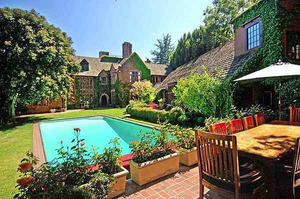 (LOS ANGELES, CA) -- Nicolas Cage is leaving Bel-Air. And not by choice.

The fate of the sprawling Tudor mansion owned by the actor, who won an Oscar for his role in "Leaving Las Vegas," was decided Wednesday far from the baronial estate.

It was up for auction Wednesday morning -- along with a handful of other foreclosed properties -- on the steps of the county courthouse in Pomona.

After a rapid-fire spiel by the auctioneer, the bidding was opened at $10.4 million, far less than the $35 million that Cage had tried unsuccessfully to sell the house for.

To put it mildly, the house, though impressive, was not to everyone's taste. Real estate agent Bret Parsons, who toured it most recently in October, described the interiors as "fascinating and bizarre."

"The design was 'frat house bordello,' "Parsons said. "There must have been 300 comic book covers elaborately framed and hanging on the walls."

Model train sets on raised tracks a couple feet below the ceiling circled the inside of the breakfast room and two bedrooms.

There were also no takers in the courthouse sale, and in less than a minute the auction closed, with ownership reverting to the foreclosing lender -- just one of six holding a total of $18 million in loans on the property.

The pattern of repeated borrowing against equity is familiar to Bob Baker, sales manager of County Records Research, a Huntington Beach-based company that supplies information about foreclosure properties.

"This is a microcosm of what's going on in our state," Baker said. "We've seen as many as 13 loans on a house."

When people keep borrowing, he said, it has "a snowball effect." The final loans often are taken out to meet expenses, he said. "It's a survival tactic."

This is not the only property lost to foreclosure by Cage, who was ranked last year by Forbes as the fifth-highest-paid actor in the U.S. with earnings of $40 million.

Cage's publicist said the actor could not be reached for comment.

The complaint, filed in Los Angeles County Superior Court, accused Levin of having "lined his pockets with several million dollars in business management fees while leading Cage down a path toward financial ruin."

Levin filed his own countersuit, describing Cage as setting off "on a spending binge of epic proportions" and states that by July 2008 Cage owned "15 palatial homes around the world," four yachts, an island in the Bahamas, a private Gulfstream jet and millions in art and jewelry.

The courthouse event practically eliminated the lenders' chances to collect on the last four loans because they're no longer secured by the real estate.

"This makes it easier to buy," said James Chalke of Beverly Hills real estate firm Nelson Shelton & Associates, who once had the listing on the house.

Although Chalke had clients who were interested in the estate -- and at one point a $12-million offer -- the debts made negotiating with the lenders difficult, he said. "They weren't prepared to come down."

An owner-occupant, rather than an investor, will probably be the buyer now, said Stephen Shapiro, who expects to retain the listing at his Beverly Hills-based Westside Estate Agency.

The property was built in 1940 for $110,000, said Parsons, who is also the author of "Colcord Home" about architect Gerard Colcord, who designed the landmark property.

It was once owned by singer Dean Martin, who in 1974 commissioned Colcord to add a 2,500-square-foot entertainment complex. When another singer, Tom Jones, owned it, a $60,000 wall was erected around the property to keep adoring fans at bay.

Parsons blames the pricing for the fact that Cage couldn't unload the house, even after it came down to $17.5 million. But the real estate agent also noted that the lot was squeezed with the addition of the entertainment complex. And, he said, there was no room left for a tennis court.

"People at that level want all the requisite amenities," he said.

Still, he thinks it's a rare find for the right buyer. "It is a superb home," he said. "The floor plan, craftsmanship, location. It's a great house."