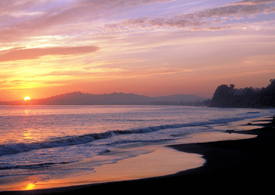 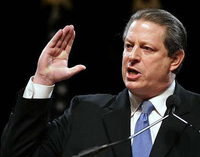 (LOS ANGELES, CA) -- In a move that critics may cite as his own inconvenient truth, former Vice President Al Gore and his wife, Tipper, have added a house in secluded Montecito, Calif., to their real estate holdings.

The couple spent $8,875,000 on a gated ocean-view villa on 1 1/2 acres with a swimming pool, spa and fountains, according to real estate sources familiar with the deal. The Italian-style house has high ceilings with beams in the public rooms, a family room, a wine cellar, terraces, six fireplaces, five bedrooms and nine bathrooms in more than 6,500 square feet of living space.

Montecito has long been a haven for Southern California's rich and famous, a spot where celebrity faces can blend into the crowd. Among the community's notable residents have been talk show giant Oprah Winfrey, actors Michael Douglas and Christopher Lloyd, and golfer Fred Couples. The 93108 ZIP Code, which includes the coastal hamlet, was ranked as America's seventh most expensive area last year by Forbes.

Word of the purchase was reported in late April in the Montecito Journal. Gore, 62, did not respond to The Times' requests for comment.

Three years ago, Gore added solar panels and other energy-saving features to his 10,000-square-foot mansion in Belle Meade, Tenn., after he had been criticized for the amount of energy the home used.

After serving as vice president from 1993 to 2001 and playing spokesman on global warming in his 2006 Academy Award-winning film "An Inconvenient Truth," Gore is now chairman of Current TV. He also is the founder and chairman of the Alliance for Climate Protection and a founder of the Beverly Hills-based environmental organization Live Earth.


No Cage, Just a Captive Audience

The 1940 Bel-Air estate until recently owned by actor Nicolas Cage is back on the market at $12.75 million, the Multiple Listing Service shows.

Cage lost the trophy home at a foreclosure auction earlier in April on the county courthouse steps in Pomona, Calif., when it failed to generate any bids and ownership reverted to Citibank. The foreclosing lender was one of six holding a total of $18 million in loans on the English Tudor, which had been marketed for as much as $35 million.

The baronial mansion, at 11,817 square feet, has a central tower, a custom wine cellar, a 35-seat home theater, six bedrooms and nine bathrooms. There is a brick paved motor court and a swimming pool.

The gated house, now empty of Cage's belongings and furniture, was open to real estate agents last week. Missing too are the 35 bronze wall sconce holders made from a cast of the Oscar winner's arm.

Former owners of the property include entertainer Dean Martin and singer Tom Jones.

Shrine to Green in Brentwood

Soap star Peter Reckell and his wife, singer Kelly Moneymaker, have listed their custom-built, eco-friendly home in Brentwood for $6,499,000.

The couple had their original home on the site torn down, crated and shipped to Mexico for reuse by Habitat for Humanity. Then they designed and built a three-bedroom, four-bathroom contemporary that maximizes solar power and cross-ventilation.

Along with an indoor/outdoor koi pond, a meditation fountain and a solar infinity pool, outdoor amenities include a 16th century East Indian temple that was turned into a portico and frames views of the Santa Monica Mountains Conservancy. "This is my sanctuary," Reckell said.

The kitchen has a pizza oven and a walk-in wine cellar. There are 360-degree views from the rooftop office.

Moneymaker, 39, is a former member of the music group Expose. She was inspired to build green because the carpet and other elements in the old house bothered her allergies and affected her voice.

The pair did not say why they are selling.


House is Ready for Next Star

The home cost $30,500 to build in 1937, according to Los Angeles Times archives, which described it as a two-story dwelling designed by architect Paul T. Emery.


A Hot Spot on Broad Beach

Update: A Malibu beach home once owned by actor-producer-director Robert Redford has sold for $11.75 million.

The gated two-story, built in 1948, has walls of glass, and stone and hardwood floors. There are five bedrooms, 4 1/2 bathrooms, two fireplaces and 5,329 square feet of living space in the seaside house along Broad Beach.

The house came on the market in January at $13.8 million.